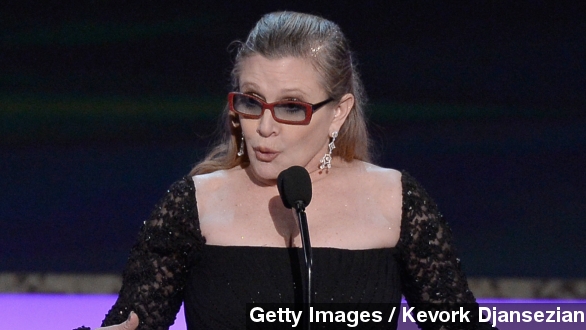 And Fisher’s hilariously snarky introduction was something only a daughter could get away with.

"She's been more than a mother to me, not much. She is a movie star, recording artist, television actor, nightclub entertainer, Broadway performer and co-founder of the thalians, a group that has raised more than $30 million for mental health." (Video Courtesy of the 21st Annual Screen Actors Guild Awards®)

"Well, mental health-related causes, and $4.5 million of that money is allocated just for me." (Video Courtesy of the 21st Annual Screen Actors Guild Awards®)

She also mentioned one other famous name — Elizabeth Taylor. Though the two reconciled, Debbie and Elizabeth infamously feuded after Elizabeth had an affair with Debbie's then-husband, actor Eddie Fisher.

"Prior to our original introduction, Debbie Reynolds was already the voluptuous, fertile half of America's sweethearts, Elizabeth Taylor's matron-of-honor." (Video Courtesy of the 21st Annual Screen Actors Guild Awards®)

And considering their mother/daughter relationship has been known to be a bit strained at times, Fisher’s little digs at Reynolds had the potential to be a little, well, awkward.

But as many media outlets noted, Fisher was the perfect person to present Reynolds with her lifetime achievement award — who else knows her mom better?

Basically, both Carrie and Debbie stole the show. Talent runs in the family.