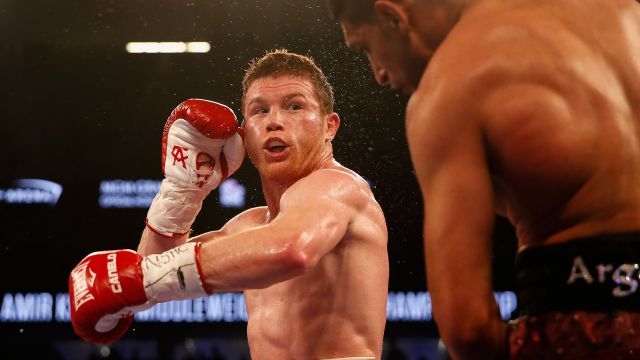 SMS
Canelo Alvarez KOs Amir Khan, Could Fight Triple G Next
By Matt Moreno
By Matt Moreno
May 8, 2016
Alvarez KO'd Khan in the sixth round. After the fight, Alvarez called out Gennady Golovkin who was sitting ringside.
SHOW TRANSCRIPT

Speed versus power. Power versus speed. That's how the Canelo Alvarez-Amir Khan fight was billed before Saturday night, and that's exactly what viewers got — with power coming out on top.

Alvarez delivered a devastating knockout in the sixth round of the WBC middleweight title fight. He was the slight favorite heading into the fight and two out of the three judges, prior to the knockout, scored the bout in his favor.

Khan was taken to the hospital after the knockout but appeared to check out fine, posting to Twitter from the ambulance, "I'm okay everyone."

After the fight, Alvarez didn't mince words: He wants to fight Gennady Golovkin, aka Triple G, next.

Triple G had ringside seats to the bout. Alvarez motioned for him to enter the ring after the KO. Not surprisingly, he didn't accept the impromptu invitation.

Instead, the two are expected to meet at a later date at 160 pounds.