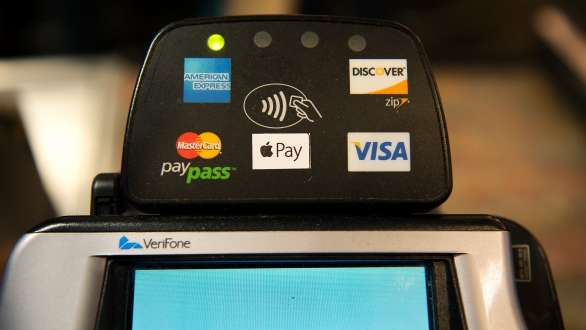 SMS
Can CurrentC Beat Apple Pay In Payment Popularity Contest?
By Jamal Andress
By Jamal Andress
May 11, 2015
A group of merchants hope their payment system, CurrentC, is the answer to Apple Pay, but will the app, if it's ever released, catch on?
SHOW TRANSCRIPT

Apple Pay is everywhere and seems to only be expanding. In January, CEO Tim Cook proudly announced that out of every $3 spent using contactless payments, $2 was spent using Apple Pay.

That creates a big problem for Merchant Customer Exchange, or MCX, as well as its unreleased app CurrentC. CurrentC is the the merchant-led group's answer to Apple Pay, and it's the reason some of the country's largest retailers aren't accepting Apple's payment system.

Perhaps the largest on that list is Wal-Mart. Walmart is one of the founding member retailers when the Merchant Customer Exchange was created back in 2012.

While, MCX's website will tell you the CurrentC app is about "[streamlining] the customer shopping experience" most outlets say CurrentC's real purpose is to help retailers across the country dodge fees from credit card companies.

"This is the Samsung Experience Shop, only at Best Buy."

But MCX is having trouble keeping CurrentC from disappearing in Apple Pay's shadow. In late April, Best Buy announced it would start accepting Apple Pay at stores, even though it's still a member of the Merchant Customer Exchange.

As it stands, CurrentC is not available nationwide, but Money points out that even when the app is ready, big companies like Wal-Mart could have trouble getting other retailers on board:

"It may simply be too difficult to corral enough competing merchants into a coherent, cooperative group—especially when one of those merchants, Walmart, poses an existential threat to the others."

Luckily for Walmart and others invested in CurrentC's success, U.S. retailers have been slow to adopt the Near Field Communication devices needed for Apple Pay to work. According to ComputerWorld, the number of NFC-ready terminals hovers at less than 10 percent.