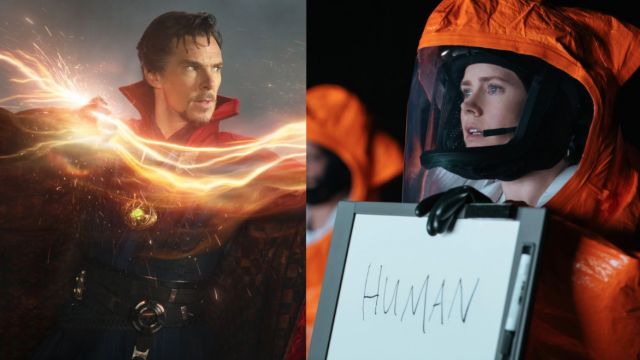 SMS
The Box Office Benefits From Veterans Day And A Little Election Stress
By Jamal Andress
By Jamal Andress
November 13, 2016
This weekend, domestic box office revenue was up nearly 50 percent over the same weekend last year as moviegoers get a much needed release.
SHOW TRANSCRIPT

I think we can all agree it's been a long week, which made it the perfect time to put aside our differences, come together and sit in a dark room for a couple hours while gazing at Benedict Cumberbatch.

Taking the No. 1 spot again this week is Marvel's "Doctor Strange," bringing in an estimated $43 million domestically in its second week out — pushing Marvel's latest to nearly half a billion dollars worldwide in just 10 days.

Because of the constant success of Marvel studios, we occasionally lose sight of what the company has managed to accomplish. Allow me to remind you.

Since Iron Man's debut in 2008, Marvel Studios has released 14 titles. All 14 have brought in more than $100 million domestic dollars — every single one. If you tally up all the money the studio has managed to bring in across the globe, you're looking at just over $10 billion dollars.

Not too shabby for a bunch of comic book characters.

SEE MORE: Comic Books, Like Everything Else, Benefit From Diversity

Holding on to the No. 2 spot this week is "Trolls," bringing in about $35 million — only $11 million less than last week. That's an especially solid holdover for an animated film.

Taking the No. 3 spot this week is "Arrival," which earned $24 million in its domestic debut. Box office predictions for Amy Adams' new flick were only around $18 million.

Much like "Doctor Strange" and "Trolls," this sci-fi thriller also benefited from a booming box office this weekend.

With Veterans Day on Friday, a particularly stressful election Tuesday and great reviews for all three major titles, analysts say domestic box office revenue was up 50 percent this weekend compared with the same weekend last year.

As for next week, "Harry Potter" fans get their long-awaited mystical fix with "Fantastic Beasts and Where to Find Them."