Bond, Jane Bond: These Women Want The Role Of 007 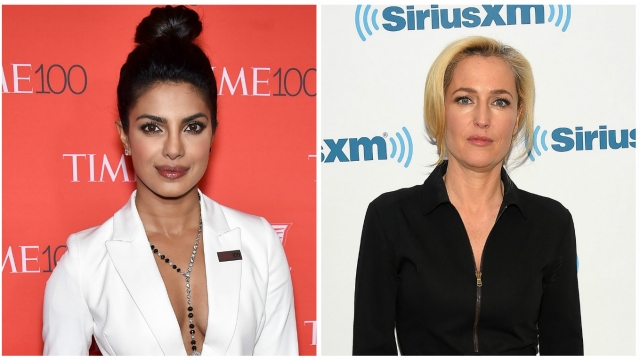 SMS
Bond, Jane Bond: These Women Want The Role Of 007
By Cody LaGrow
By Cody LaGrow
May 24, 2016
Actresses Priyanka Chopra and Gillian Anderson hinted that the next James Bond should be a woman.
SHOW TRANSCRIPT

James Bond. His hobbies of sports car driving, gunslinging and womanizing make him the epitome of masculinity.

And it seems being a Bond girl has been a sort of crowning of Hollywood's most attractive actress. (The casting seems to have more to do with looks than acting abilities.)

Now, two women are saying forget being a Bond girl — they're ready to be Bond, Jane Bond.

Actress Priyanka Chopra's got the drinking and appeal-to-the-opposite-sex-thing down. When "Complex" asked the "Quantico" star if she agreed with people saying she'd make a great Bond girl, she said, "I get that all the time. But f*** that — I wanna be Bond."

And over the weekend, "The X-Files" star Gillian Anderson tweeted this fan-made "007" movie poster with the hashtag #NextBond. The post received more than 23,000 likes.

It's likely that makers of Bond movies won't break the mold and make way for Jane Bond. So far, the buzz on who will fill Daniel Craig's shoes adheres to the rule that Bond should be a British man — Idris Elba and Tom Hiddleston are rumored to have been considered.

So, sure, when it comes to Bond, it seems to be a man's world. But shout out to two independent females who are advocating to play roles that reflect who they are as strong women.