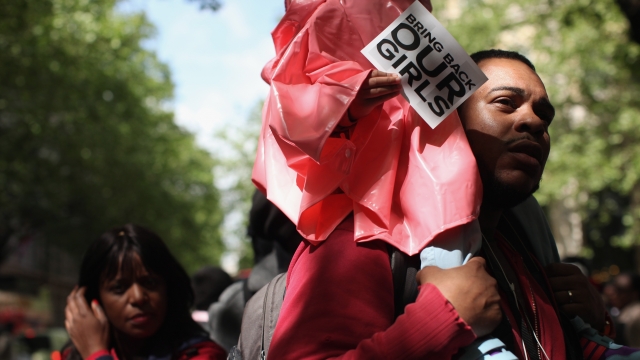 SMS
Boko Haram Reportedly Demanding Ransom for Kidnapped Schoolgirls
By Bell Johnson
By Bell Johnson
April 9, 2016
Boko Haram reportedly has a new ransom deal for the Chibok schoolgirls, according to The Telegraph, but doubts remain due to failed past negotiations.
SHOW TRANSCRIPT

Boko Haram is reportedly demanding a roughly $50 million ransom for the more than 200 kidnapped schoolgirls who were abducted nearly two years ago.

This isn't the first time the terrorist group has offered the girls' release. Past negotiations brokered by the Red Cross and through the Nigerian president have only fallen through.

Sources told The Telegraph Boko Haram issued the new ransom deal reportedly during secret meetings with the Nigerian president, but the "rumors" of the ransom don't have many convinced.

This follows new reports that at least 105 women and girls have been used as suicide bombers since June 2014. There's never been any confirmation, however, any of the Chibok schoolgirls were used as bombers.

A former Nigerian government adviser, who spent months attempting to negotiate for the girls' freedom, told The Telegraph the group realizes the girls are "the ace in their hand."

He claims the only way to free the schoolgirls is to capitalize on their captors' "combat fatigue."

This video includes clips from Vice and Al Jazeera.