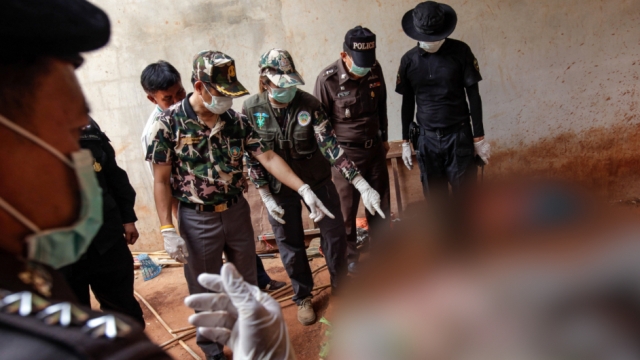 During an investigation of the "Tiger Temple" in Thailand, wildlife officials found the bodies of 40 tiger cubs in a freezer Wednesday.

This latest find at the Buddhist temple and tourist attraction comes as authorities have continued to remove the tigers from the site since Monday.

For years, critics have said the big cats were kept at the temple only for profit and weren't properly cared for.

But the temple has denied animal mistreatment allegations and last week blamed Thailand's wildlife division of abusing some of the animals after confiscating them.

That's because even though the tigers lived at the temple, the cats were technically "property" of Thailand's wildlife department.

As for the cub remains, on Facebook the temple reposted a statement from March that said the cubs were frozen because they had to be registered with the government as proof their bodies weren't sold illegally.

But investigators say only one of those cubs was reported.

The temple also alleges the cubs' remains weren't sold on the black market and that officials knew "about these carcasses for a long time."

In some parts of Asia — especially China — tiger remains are used in traditional medicine, even though the trade is illegal.

Thailand has a history of poaching, alleged animal abuse and mistreatment all in the name of money and tourism.

Under Thailand's 2010-2022 "tiger action plan," the country said it hopes to monitor and increase tiger populations, while tightening laws for animal abuse.