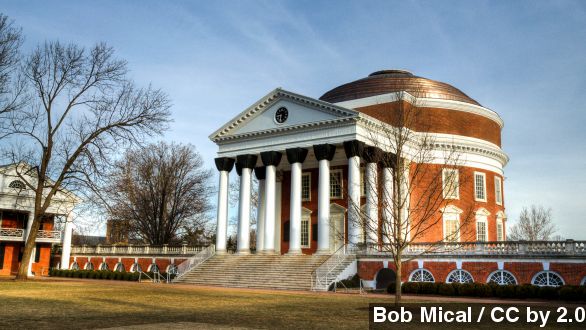 “Yo, was that really necessary?"

That video, which depicts the arrest of black honor student Martese Johnson, has the University of Virginia embroiled in controversy after he was thrown to the ground and arrested Tuesday night outside a bar in Charlottesville.

Johnson is a junior at the University of Virginia and a leader in its Black Student Alliance. He was denied entry to a bar in Charlottesville Tuesday, allegedly because of a dispute about whether his ID was valid.

It's unclear exactly what happened next, but at some point shortly after being denied entry to the bar, officers with Virginia's Department of Alcoholic Beverage Control reportedly flung Johnson onto the street, breaking the skin on his head and leaving the sidewalk splattered with his blood.

The incident is picking up national attention, the result of social media and the graphic video of Johnson's arrest.

Johnson, who has no criminal record, has been charged with resisting arrest, obstructing justice without threats of force, and public swearing and intoxication. He needed 10 stitches for the wound on his head.

In Johnson's summons order, police officers noted that he was "agitated and belligerent."

Virginia Governor Terry McAuliffe moved quickly, saying he was "concerned by the reports of this incident" and ordered an independent investigation into the matter. The police officers who made the arrest have been restricted to office work.

The speed at which McAuliffe, a Democrat, ordered the investigation is no surprise amid a national conversation about police brutality against black communities spurred by the deaths of Tamir Rice, Eric Garner, and Michael Brown. (Video via VICE News)

UVA's Chancellor Teresa Sullivan has also asked for a review of the incident, and urged eyewitnesses to come forward with their stories.

Many Virginia students, meanwhile, accuse the police of beating up Johnson for, at most, having a fake ID. A protest is planned on Virginia's campus for Wednesday night.