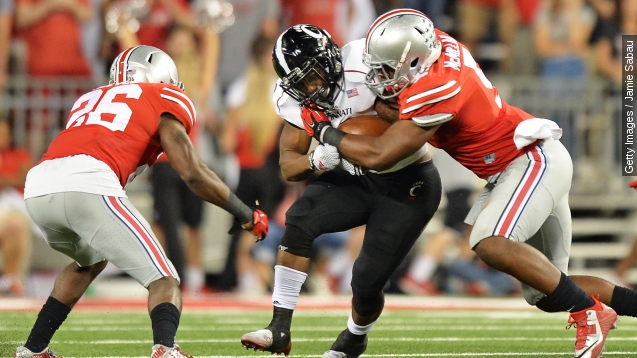 With a slate of early games on Thursday, college football is officially back. And September football means huge blowouts for national powerhouses like Alabama and Ohio State.

Last year, for example, the national champion Buckeyes obliterated Kent State 66-0. So, why would a team so helplessly over-matched even schedule that game? The answer: money.

Kent State reportedly pulled in $850,000 for making the trip up to Columbus. And plenty of other schools in small conferences make deals just like it.

Cincinnati received a similar payout for visiting Ohio State, and Hawaii will get $1.2 million to be the second team on OSU's schedule this year. The Buckeyes will start their season at ACC power Virginia Tech, but will only receive $350,000.

You'd think bigger teams would command a larger payout, but that's not the case. It turns out convincing a team to play a game they'll almost certainly lose costs quite a pretty penny.

The power conference teams are happy to make the deal because fans, of course, like winning, and large schools with big stadiums can make millions of dollars on a single game. And the smaller schools don't really have a choice.

When the Big 10 considered eliminating these so-called "paycheck games" in 2013, athletic directors at smaller programs scrambled to try and keep the match-ups intact.

University of Northern Iowa Athletic Director Troy Dannen told Forbes, "The loss of the Big Ten schools will be devastating, to UNI and to a lot of our peers.” They made almost a million dollars playing Iowa and Wisconsin in 2012, which covered a big chunk of their $3.3 million budget.

It may not be fun getting blown out in front of tens of thousands of people, but many schools can't afford not to play these types of games.

A 2013 report from the NCAA revealed only 20 of the 123 FBS schools saw their athletic department turn a profit. And football is one of very few sports that can draw enough fans to pull in any significant revenue.

It seems if you want to play football at a smaller school, you'll just have to suffer some big defeats.