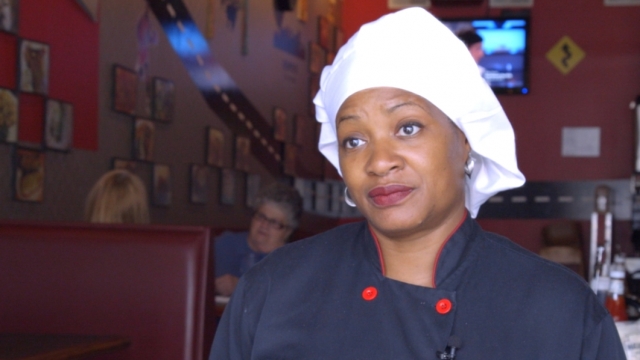 SMS
Beyond Ferguson: The City 'Looks Like Hope'
By Ben Schamisso
By Ben Schamisso
August 12, 2016
The owner of Cathy's Kitchen reflects on the 2014 unrest, damage to her building and how residents pitched in during her time of need.
SHOW TRANSCRIPT

"The news made it appear like the entire Ferguson was on fire, but it really wasn't," said Cathy Jenkins, the owner of Cathy's Kitchen in downtown Ferguson, Missouri. The storefront window of Cathy's Kitchen was smashed by protesters in 2014. "Everybody expected Ferguson to burn and die, no more hope. Ferguson looks like hope," she added.

"That day after they had smashed my window, Aeneas Williams, football hall-of-famer, is outside my window cutting plywood," Jenkins said. "It was incredible. But what happens after all the glam is what you want to know.

"So after 5 o'clock, we didn't get any business. I was at the point that I was going to have to close because no one wanted to come to Ferguson because they felt like, I call it the 'vampire hours. The sun goes down, 'Oh, God; get your cross out.' But as you can see, it's really not that scary.

"America is just at a difficult time right now. We've got to do something uniquely different, something that we've never done before.

"We are not the normal story that has happened after other riots," Jenkins said. "Normally, the city decays."