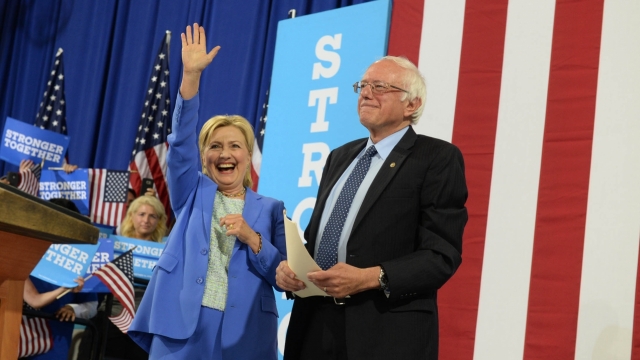 "I have come here to make it as clear as possible as to why I am endorsing Hillary Clinton," Sanders said during a campaign event Tuesday with Hillary Clinton in Portsmouth, New Hampshire.

But it was a long road to that moment.

"I wonder now in this day and age whether it is possible for any candidate who is not a billionaire or who is not beholden to the billionaire class to be able to run successful campaigns," he said when announcing his candidacy outside the U.S. Capitol on April 30, 2015.

"Today, with your support and the support of millions of people throughout our country, we begin a political revolution to transform our country economically, politically, socially and environmentally," he told supporters when he announced his campaign March 26, 2015.

"The American people are sick and tired about hearing about your damn emails," he said during a Democratic debate Oct. 13, 2015.

"I happen to respect the secretary very much. I hope it's mutual. And on our worst days, I think it is fair to say we are 100 times better than any Republican candidate," he said during a Democratic debate Feb. 4, 2016.

"She gets paid $225,000 for a speech," Sanders said March 8, 2016, criticizing Clinton's ties to Wall Street. "I am prepared to answer, to release all of the transcripts of the speeches to Wall Street that I gave. Here they are!"

During an April 14, 2016, debate, Sanders again mocked Clinton on her relationship with Wall Street, saying: "Secretary Clinton called them out. Oh my goodness. They must have been really crushed by this."

"No candidate will have enough pledged delegates to call the campaign a victory. They will be dependent upon superdelegates. In other words, the Democratic National Convention will be a contested convention," Sanders said during a June 4, 2016, press conference.

Sanders said in an interview that aired June 22, 2016, "Doesn't appear I'm going to be the nominee, so I'm not going to be determining the scope of the convention."

"CBS This Morning" host Gayle King asked Sanders on June 24, 2016, why he hadn't endorsed Hillary Clinton. He responded, "Because I haven't heard her say the things I think need to be said."

"Together, we have begun a political revolution to transform America, and that revolution continues," Sanders said at the rally Tuesday.

This video includes clips from Bernie 2016, C-SPAN, CNN, MSNBC and CBS and images from Getty Images.