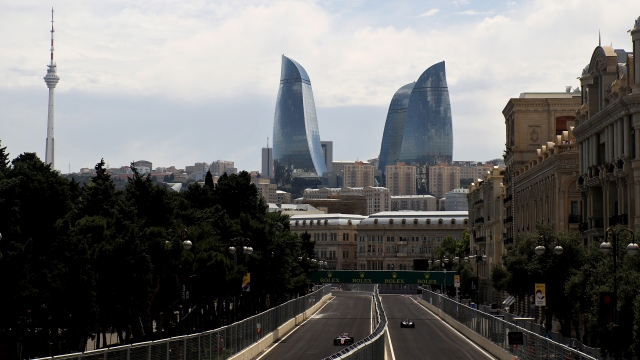 SMS
Azerbaijan Fails At Human Rights And Still Hosts Big Sporting Events
By Carter Woodiel
By Carter Woodiel
June 18, 2016
More and more prominent sporting events are held in Azerbaijan, but its government tends to clamp down on freedom of speech and civil liberties.
SHOW TRANSCRIPT

Formula One racing's 2016 European Grand Prix is Sunday, and with a name like that, you'd think it'd be in Paris, London or Rome. But it's actually in Baku, the capital of Azerbaijan.

"For a start, I don't know anything about Azerbaijan," four-time Formula One champion Sebastian Vettel said. "So I know where the country is; I know it's next to the Caspian Sea, and Baku is right by the Caspian Sea, but that's about it."

You might not have heard of Azerbaijan, either, a country that's at best considered on the edge of Europe and Asia. But its government is trying to change that by hosting more and more major sporting events.

In 2015, Baku hosted the first European games — think the Olympics, but just Europe. The games cost over $1 billion to put on but struggled to gain international traction.

And in 2020, Baku will be part of soccer's European Championship, along with a dozen other cities scattered across the Continent.

Azerbaijan has moved into sports advertising, as well. Atletico Madrid won the Spanish league title in 2014 with "Azerbaijan" on their uniforms.

But just because Azerbaijan is trying to become a household name doesn't mean it wants you to know everything about the country.

"Azerbaijan is pretty much left without any independent voices," a representative from Amnesty International told The Guardian.

Azerbaijan has come under fire for cracking down on journalists and others who speak out against its ruling elite. According to Reporters Without Borders' press freedom rankings, it's in the bottom 10 percent among world nations.

But organizers of events in Azerbaijan have largely chosen to stay silent about that, saying they don't want to mix sports and politics.

In any case, Azerbaijan isn't alone. More and more international events are being hosted by countries that aren't viewed as truly democratic, often because they're the ones that have both the money to put up such an expensive event and the consolidated power to make the call.

This video includes clips from Ferrari, Baku Media Center and The Guardian and images from Getty Images.