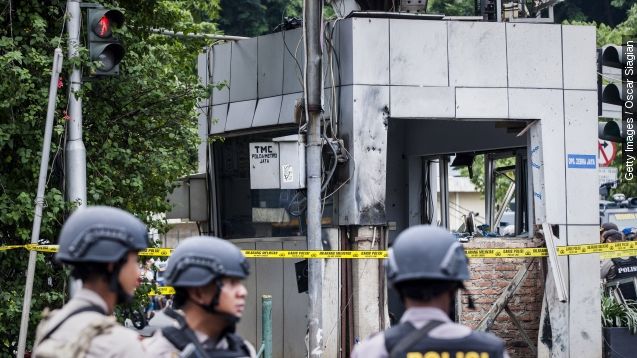 SMS
Attack In Indonesia Kills At Least 7, ISIS Claims Responsibility
By Melissa Prax
By Melissa Prax
January 14, 2016
A series of bombs and gunfire killed at least seven and injured more than a dozen in Indonesia's capital, Jakarta. Police are searching for leads.
SHOW TRANSCRIPT

ISIS has claimed responsibility for the attacks in Indonesia's capital that killed at least seven people and injured more than a dozen.

Among those dead are Indonesian and Canadian citizens and five suspected attackers.

Officials suspect the series of bombs and gunfire were meant to replicate the deadly Paris attacks. Some say there were as many as six bombs. (Video via tvOne)

The bombings seemed to target a busy part of town that houses embassies and United Nations offices.

The director of the Institute for Policy Analysis of Conflict in Jakarta told The New York Times there has been a spike in planned attacks in Indonesia over the past six months.

Last time Jakarta faced a major attack was in 2009, but Thursday's attack is said to be ISIS' first in Indonesia. There are at least three pro-ISIS groups in the country. (Video via NTDTV)

Officials say they have regained control after the coordinated attacks and are currently looking for suspects or those who can give insight.