Asking For A Friend: What's It Like To Pose As A Popular Pet Online? 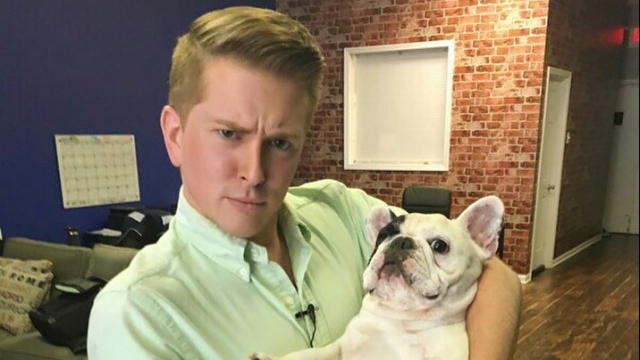 SMS
Asking For A Friend: What's It Like To Pose As A Popular Pet Online?
By Cody LaGrow
By Cody LaGrow
June 27, 2016
Newsy's Cody LaGrow sat down with Amber Chavez, the owner of Manny the Frenchie — a French bulldog with nearly 3 million followers on social media.
SHOW TRANSCRIPT

He's more famous than most and boasts nearly 3 million followers total across his social media accounts. He's glamorous, gracing magazine covers and merchandise. He's even in the same squad as Snoop.

Manny the Frenchie is a furry phenom. He's a French bulldog and one of many Notorious D.O.G.'s who've become social media powerhouses. In this "Asking for a Friend," Newsy's Cody LaGrow sat down with Manny's owner, Amber Chavez, and asked, "What's it like to pose as a popular pet online?"

Cody LaGrow: When did you realize that Manny maybe had some star quality?

Amber Chavez: Fairly early on, he's really funny. He has a lot of human qualities, so you'd catch him trying to talk. He likes to get dressed up. He just does funny stuff.

CL: Do you think Manny knows how famous he is?

CL: Does he have some diva qualities?

AC: Only Evian — out of a glass bowl. We try to keep him as normal as possible. When packages come, he kind of knows it's for him. He knows if we are packing up our suitcase, he's 99 percent sure he's coming with us.

CL: Manny's got fans? He gets fan mail?

AC: He does get some fan email. It's pretty cute. A lot of direct messages on Instagram.

CL: What goes through your mind when you want to write a caption posing as Manny on the internet?

AC: We try to make it sound like he's talking for himself. So, we try to be witty, obviously. He kind of just makes up the captions sometimes. Look, he's just being so funny. It kind of just comes naturally.

CL: Does he have an ongoing feud with Paris Hilton? This happens with celebrity DJs.

AC: Manny is kind of a DJ, so he doesn't appreciate people who pose as DJs, like Paris Hilton.

CL: What are Manny's hobbies?

AC: He likes to sleep in the sink. Manny loves girls. He has a lot of friends. He eats a lot of organic. He's not about to get braces. You have to embrace who you are. He's a very normal dog.

CL: How did Manny get involved with charities?

AC: American Apparel had reached out to us when he had only 20,000 followers. They wanted to do a co-branded T-shirt for charity.  So that's kind of where we started getting the idea to use that platform if it kept growing. So, we're like, OK, since we did that American Apparel, let's start our own website and sell our own merch and donate to charity. That's kind of all evolved now into us starting our own nonprofit.

AC: It's definitely for good. People think that we are treating him like a doll. Like he's constantly being posed. And there are photoshoots.

AC: I'm quite the opposite, actually. If we're on a photo shoot or somewhere, I'm like, is there water? Is it hot in here? He needs to go. It's been an hour and half. It all started organically, so we try to keep it that way. He is always doing funny stuff, so we try to capture it in that moment.

CL: What would Manny say is his one secret to success?