As Rubio Rises, The Media Keeps Bringing Up 'Trivial' Past 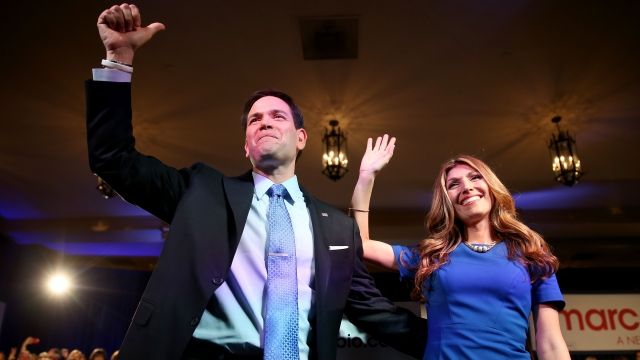 SMS
As Rubio Rises, The Media Keeps Bringing Up 'Trivial' Past
By Kate Grumke
By Kate Grumke
January 24, 2016
Once again, the candidate is calling out a newspaper for reporting on what he sees as trivial issues from his past.
SHOW TRANSCRIPT

Sen. Marco Rubio is admitting to a crime spree.

His campaign released a sarcastic video after an article in The Washington Post reported he was arrested in 1990 for being in a public park after it was closed. His campaign said the then-18-year-old was also drinking beer.

Since the beginning of his campaign, Rubio has accused papers of reporting on what he considers trivial issues from his past.

One example — The New York Times' June article about his and his wife's speeding tickets. They have received a combined 17 speeding tickets since 1997, but the choice by the paper to report the citations raised some conservative eyebrows.

But one report has had more of a lasting impact on his campaign — a New York Times article about Rubio's financial struggles.

In June, the paper outlined Rubio's large debts and his tendency to make big purchases, like an $80,000 boat, despite being in debt. It also reported on his use of a state Republican Party credit card for personal expenses.

The Rubio campaign tried to shrug the article off, saying Rubio's student loan debt makes him relatable to the millions of Americans who are in a similar situation.

But questions about his financial past continue to haunt him.

"In terms of all of that, it raises the question whether you have the maturity and the wisdom to lead this $17 trillion economy. What do you say?" asks a moderator during a GOP debate.

Still, the candidate is doing well and is currently coming in third in national polls.