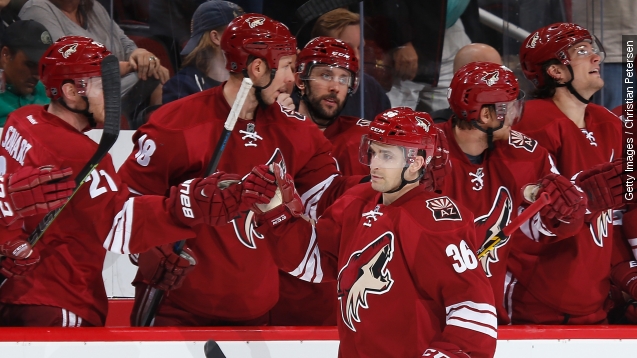 The NHL strongly denied a New York Post report Tuesday about the Coyotes leaving Arizona for Las Vegas, Nevada, but that doesn't mean it won't happen.

The New York Post reports, "The NHL is arranging the sale of the Arizona Coyotes to billionaire William Foley who will move the team to Las Vegas giving it its first major professional franchise, one source said." According to the report, that would happen in the 2016-2017 season.

Vegas for a long time has been considered a destination for the NHL. The city is currently building a new arena and already has down payments placed on 10,000 season tickets. (Video via Vegas Wants Hockey)

It isn't really a question of if the NHL is coming to Vegas, but when and who?

If it's the Coyotes, a Deadspin writer says the NHL is smart to keep things quiet for now. "Knowing the team is leaving will make it more difficult to secure an arena lease deal for a single season, and fans are more likely to cease attending games if they know the team is leaving. It behooves the Coyotes to announce their relocation as last-minute as possible."

Breaking up with a city is tough to do, especially for sports franchises.

One of the more bitter relocations in sports occurred in 2008 with the NBA's Seattle Supersonics moving to Oklahoma City.

"Their whole game plan was to get out of town and to create a much ill-will in the process as they could," Steve Kelley of The Seattle Times said.

"There's a lot of villains in this," Brian Robin of Save Our Sonics said. (Video via Sonicgate: Requiem For A Team)

In Seattle, the move was especially bitter as local government, then-owner Howard Schultz and new owner Clayton Bennett all became area villains after half-heartedly trying to keep the team in the Pacific Northwest.

In the NFL, Cleveland fans are still angry then-owner Art Modell moved the Browns to Baltimore in 1996, a sentiment rekindled when Modell passed away in 2012. (Video via WBFF)

"A lot of Cleveland Browns fans I spoke with today said Modell was 87 years old, just let him rest in peace and move on. Others told me they will never forget what Modell did to this city, they will never forgive him for moving the Browns to Baltimore," WEWS reports.

Of course, bad news for one city is often welcome news for another. When the Thrashers moved from Atlanta due to dwindling fan support, Winnipeg fans came out in strong support.

If the NHL is yanking a team from one city to the next, keeping things on the down-low for now seems like the best route. When it's time to rip the Coyotes out, it's best to do it as quick and pain-free as possible.

This video includes images from Getty Images and music from Little Glass Men / CC BY 4.0.