Are Philips' WiFi-Connected Hue Bulbs Right For You? 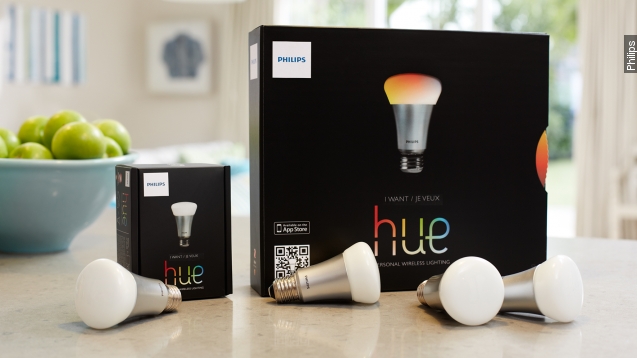 SMS
Are Philips' WiFi-Connected Hue Bulbs Right For You?
By Mikah Sargent
By Mikah Sargent
June 30, 2015
Philips' Internet-connected bulbs pack in a bunch of features, but they're a bit pricey. Are they right for you?
SHOW TRANSCRIPT

The Internet of Things is fast- and ever-growing, and there are a few companies out there that have taken the lead on bringing Internet-connected objects to the masses.

Like Philips, which makes a range of Internet-connected light bulbs in various sizes and shapes.

The range is called Hue, and the standard starter kit, called the — you guessed it — Philips Hue Starter Kit, contains three LED bulbs and a little device called a Hue bridge, all for $199.99. You can buy individual Hue bulbs for $59.99, and each one has a 15-year lifespan.

The LEDs in each of the bulbs emit a spectrum of colors, enough for creating 16 million different hues — we’d venture to guess that’s where the name came from.

That bridge we mentioned before is used to communicate with the bulbs. You plug the bridge into your router, and it takes care of telling the bulbs what you want them to do.

Most interaction will take place on your smartphone, using the Hue app. From there you can change the color and intensity of your lights, set up alarms and timers, and even geofences.

Geofences are pretty much what they sound like: invisible, geographic fences you set up using GPS. So you can place a geofence around your house, and have that turn off your lights when you move outside of the fence, and turn them on when you move inside the fence.

And with access to over 250 third-party apps, there are loads of other interactions. You can, for example, use an app called Ambify to sync up your lights to music. They'll flash, pulsate, and change color to the beat of your favorite jams. (Video via YouTube / JPL De C)

You can also link up Hue bulbs and automation service IFTTT, which stands for If This Then That. IFTTT lets you connect multiple apps and services together using what it calls "recipes." You might set up a recipe to make your Hue bulbs flash blue when you get a new follower on Twitter, or red when your stock portfolio drops below a certain level.

In other words, while you may not immediately realize it, there's a whole lot you can do with a set of light bulbs connected to the Internet.

CNET praises Hue's integrations with third-party apps, and even built in features like the geofences we mentioned before. But it isn't quite sold on the price, writing, "three-bulbs-and-a-hub is expensive at $199, the novelty factor will wear off for many users quickly."

And PC Magazine agrees with that sentiment. The outlet call the bulbs "prohibitively expensive." Despite that prohibitive price, though, PCMag still seems to like the bulbs. It gave Hue an "excellent" rating, and gave the WiFi bulbs an Editors' Choice award.

In rounding up several reviews of Philips Hue, we found a common theme throughout: While the bulbs are on the expensive side, if you're looking for a feature-packed set of light bulbs you can control from your phone, Hue's for you.

So if any of the features we've explained entice you more than the price repels you, head on over to the Philips Hue website to pick up a set of your very own.

This video includes images from Philips.