Apple Says It Killed The Headphone Jack Out Of 'Courage' 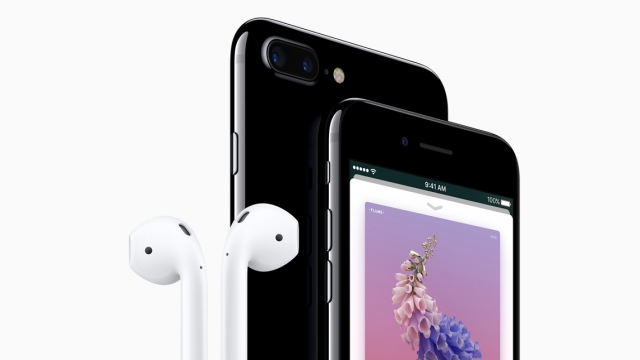 SMS
Apple Says It Killed The Headphone Jack Out Of 'Courage'
By Matt Picht
By Matt Picht
September 7, 2016
Apple's iPhone 7 won't have a 3.5 mm headphone port but will ship with an adapter and a set of Lightning headphones.
SHOW TRANSCRIPT

We're finally about to find out what happens when an unstoppable design ethos meets an immovable port. Apple's new iPhone 7 models come with two cameras, stereo speakers and no 3.5 mm headphone jack.

Apple has abandoned the nearly ubiquitous audio standard in favor of a single Lightning port; it's also selling a pair of wireless headphones called AirPods for $160. Apple's marketing chief Phil Schiller actually stood on stage and called this a courageous move with a straight face.

"It really comes down to one word: Courage. The courage to move on and do something new that betters all of us," Schiller told the crowd.

Apple's argument here is that wired headphone technology is outdated and needs to be replaced, and the company's forcing the industry to adapt by boldly abandoning a cherished standard. The company's used similar tactics in the past to send USB and Flash into obsolescence.

But bravery's only getting Apple so far this time; the company is also shipping its new iPhone with a pair of wired Lightning headphones and a Lightning-to-3.5 mm adapter.

And that's probably because, unlike with past tech Apple's killed, there's no clearly superior standard waiting to fill in for the humble headphone jack. Bluetooth audio is improving but still spottier than wired audio, and Lightning cables have a reputation for fragility.

Apple is betting that in a few years we'll have a wireless audio standard that makes 3.5 mm headphones look like floppy disks; until then, be prepared to carry another extra dongle around. The iPhone 7 models ship Sept. 16 and will start at $649.