Another Sinkhole Opens Up In Florida 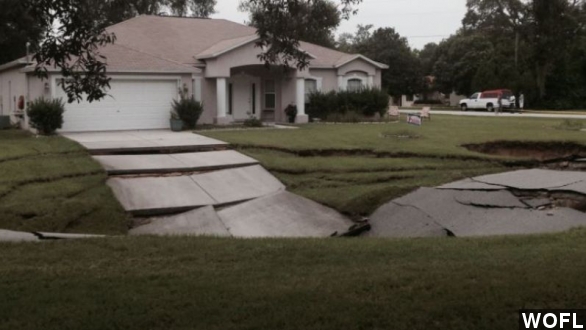 SMS
Another Sinkhole Opens Up In Florida
By Tori Partridge
By Tori Partridge
July 20, 2014
A sinkhole in Spring Hill, Florida has quickly expanded to 120 feet wide and almost 30 feet deep. Some residents of the neighborhood have evacuated.
SHOW TRANSCRIPT

"Deputies say the sinkhole started out as 25 feet wide and 30 feet deep, that is big, but it has since grown bigger." (Via WKMG)

The sinkhole appeared in Spring Hill, Florida, part of Hernando County. That's less than an hour from the county where a Florida man died in March last year after a sinkhole opened up under his bedroom. (Via CNN)

This latest sinkhole is now 120 ft wide and nearly 30 ft deep. WTSP reports police are on standby to evacuate more homes as the earth continues to fall away.

Although sinkholes are rare — and deaths from sinkholes even more so — Florida is apparently quite the popular place for them. The state has seen almost 300 ground depressions since 2010.

The entire state of Florida is classified as a karst landscape, which is formed when water dissolves carbonate bedrock, often limestone. A collapse can be triggered by a change in groundwater levels or heavy rainfalls. The collapses can leave even larger holes underground. (Via U.S. Geological Survey)

The holes left behind can be filled with a combination of sand and cement. Another technique called compaction grouting can also be used. Soil is injected into the earth and displaces the ground around it, making it more compact. (Via YouTube / Steve Marsh, Trial Exhibits, Inc.)

Police will continue to monitor the Spring Hills sinkhole through Sunday, when the cleanup process can begin.

CORRECTION: A previous version of this video incorrectly stated that Spring Hill, Florida is in Hillsborough County. The video and transcript have been corrected.