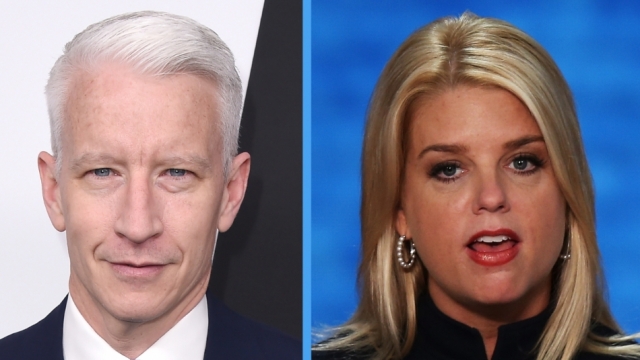 SMS
Anderson Cooper Went After Florida's Attorney General On LGBT Issues
By Katherine Biek
By Katherine Biek
June 15, 2016
Cooper noted the Florida attorney general said in 2014 that recognizing same-sex marriages in other states would cause "public harm" to her state.
SHOW TRANSCRIPT

"Do you really think you're a champion of the gay community?" Anderson Cooper asked.

Cooper referenced a brief Bondi filed in response to a 2014 lawsuit that claimed, because the state of Florida would not recognize same-sex marriages legally performed in other states, Florida was discriminating against those couples.

After Cooper told Bondi some in the LGBT community thought of her as hypocritical, she said she was just trying to uphold Florida's Consitution.

But Cooper, who it should be noted came out as gay several years ago, kept pressing the issue, and Bondi seemed to get more flustered as the live interview went on.

"Are you saying you do not believe it would do harm to Florida?" Cooper asked.

The interview got a lot of media attention, with many headlines calling attention to Cooper's tense line of questioning.

A writer for Politico even described the interview as Bondi walking "into an Anderson Cooper-sized buzzsaw."

In his interview, Cooper also pointed out Bondi has "never tweeted about Gay Pride Month," though she has tweeted about National Dog Day. Her response?

"If you look at my website now, we have hands clasped together, all different-colored, rainbow-hands people," Bondi said.

Newsy couldn't find a "rainbow-hands" image on her campaign website, official government website or any of Bondi's social media accounts.

On Wednesday, Bondi told WOR 710 Radio she went into the CNN interview believing Cooper would ask about helping victims and families who lost loved ones in Sunday's Orlando mass shooting.

"There's a time and place for everything. But yesterday wasn't the time nor the place in front of a hospital when we could have been helping victims.   Bondi said.

Bondi also accused Cooper of editing her interview, saying he and the network cut out a portion that focused on fraudulent money scams set up to look like they're helping Orlando victims. She wants CNN to either publish the entire interview or pull the story.