An Australian Town Is Being Overrun By Giant Bats 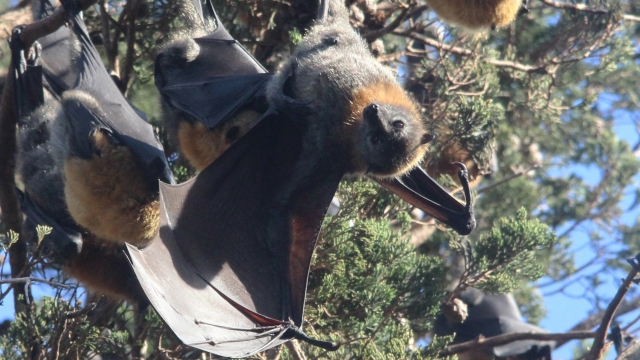 SMS
An Australian Town Is Being Overrun By Giant Bats
By Carter Woodiel
By Carter Woodiel
May 29, 2016
An unprecedented number of flying foxes, bats with a 3-foot wingspan, have taken up residence in Batemans Bay.
SHOW TRANSCRIPT

If you think getting bitten by mosquitoes in your backyard is tough, try living in Batemans Bay, Australia, a town that's been overrun by 100,000 bats.

These are grey-headed flying foxes, a bat species that can have a 3-foot-long wingspan. They've been running the joint in Batemans Bay since at least March, and locals are sick of it.

"The bats came and they are just out of control," Danielle Smith, a local resident, told Sky News. "They just — you just can't do anything because of them."

Flying foxes tend to set up large camps to congregate in during the day, but the one in Batemans Bay is of unprecedented size, forcing residents to hole up in their houses to avoid them.

So why are they there? In a word — food. The local government says trees near Batemans Bay have been flowering recently, and the nectar from those flowers is an important source of food for the bats.

The local government has proposed an extensive plan to push the bats out, calling for 70 workers to carry out the job. The state government has already provided $1.8 million toward the effort.

But the odds are against them. A government report took a look at 17 similar disposal efforts since 1990, all but one of which failed to put a dent in the number of bats.

One option that's not on the table is exterminating the bats. They're listed as a vulnerable species, so authorities aren't allowed to kill them, and culling a few probably wouldn't do much in the long run anyway.

Animal rights activists say the bats will eventually be on their way when the time comes, but it sounds like Batemans Bay residents are through with waiting and being driven batty by the flying foxes.