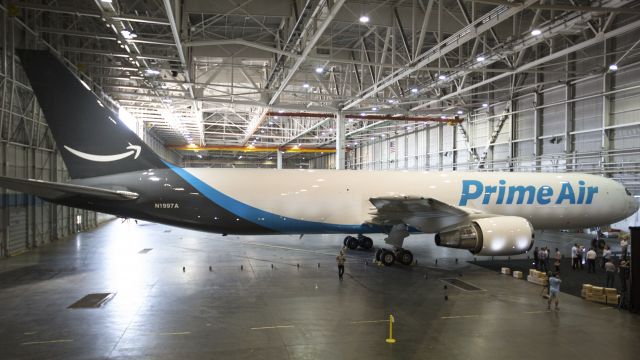 Amazon Prime Air has arrived — just maybe not in the way everyone expected.

Rather than have drones deliver packages, as Amazon alluded to earlier this year, the online retail giant unveiled its first branded cargo plane that will speed up the delivery process.

The jet, aptly named "Amazon One," is the first in a series of 40 aircraft the company plans to lease through cargo airline Atlas Air and the Air Transport Services Group.

The new cargo plane isn't the only aircraft Amazon has in the sky. The company has 11 other planes in the air and has plans to add more over time.

This is one move in a series of efforts to boost delivery speeds. Last year, the company launched Amazon Flex, which lets local drivers to make deliveries using their own cars.

Amazon's latest investment could help the company move away from delivery services like UPS and FedEx and take more control over its shipments.

This video includes clips from Amazon.