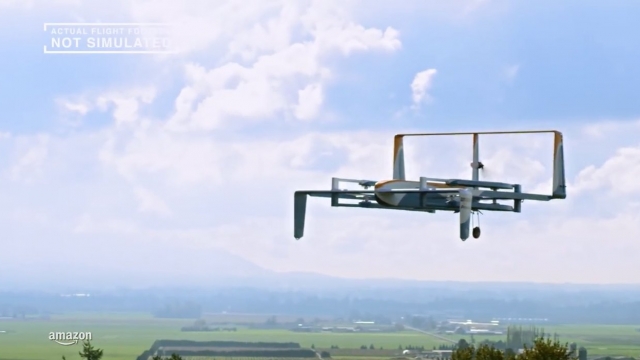 SMS
Amazon Is Finally Going To Test That Drone Delivery You Heard About
By Ryan Biek
By Ryan Biek
July 26, 2016
Amazon will work with the U.K. Civil Aviation Authority to test drone flights beyond a handler's line of sight.
SHOW TRANSCRIPT

Amazon finally gets to test key drone delivery technology. It just has to go outside the U.S. to do it.

The online retailer has announced it's partnering with the U.K. Civil Aviation Authority to test technology that helps drones avoid obstacles, allows a handler to fly multiple drones at once and enables drones to fly beyond the handler's line of sight in suburban and rural areas.

Regulations in the U.S. don't allow those trials beyond the handler's line of sight.

The worry isn't necessarily that the drones will collide with planes. These tests in Great Britain will be happening under 400 feet. Amazon is trying to work out how to navigate power lines, trees, people, other drones, etc. as it flies near your home.

And the tech has to let one handler to safely operate multiple drones at the same time, or it kind of defeats the purpose of automation.

At the same time, the British government will be working closely with Amazon during these tests to see what kind of policy needs to be in place in the future.

Amazon's ultimate goal is to deliver packages to customers in under 30 minutes. In addition to tests in the U.K., the company is conducting trials in Canada and the Netherlands.