Alex Becomes The First Hurricane To Form In January Since 1938 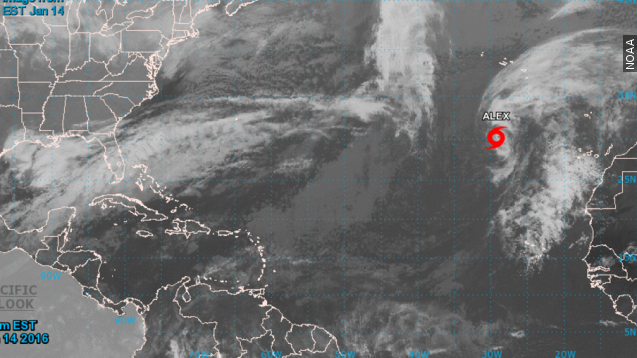 SMS
Alex Becomes The First Hurricane To Form In January Since 1938
By Samantha Crook
By Samantha Crook
January 14, 2016
The rare storm making its way toward the Azores in the eastern Atlantic Ocean is now a hurricane.
SHOW TRANSCRIPT

The rare January subtropical storm Alex was upgraded to a hurricane Thursday.

Hurricane Alex is making its way toward the Azores in the Atlantic. The hurricane has winds around 85 mph and could dump up to 7 inches of rain on the islands through Friday.

In an update on the storm, the National Hurricane Center actually pointed out it was the center's off season for tropical weather outlooks.

Alex is rare, but not entirely unprecedented. (Video via The Weather Channel)

Alex is only the fourth known tropical or subtropical storm to form in the month of January. And its classification as a hurricane makes it even more rare.

The National Hurricane Center said this is the first January hurricane to form since 1938.

Earlier this week, another weather milestone was reached when Pali became the earliest hurricane ever to form in the central Pacific.

A meteorologist at The Washington Post said El Nino and climate warming could play a role in both cyclones.

This video includes an image from David Stanley / CC BY 2.0.