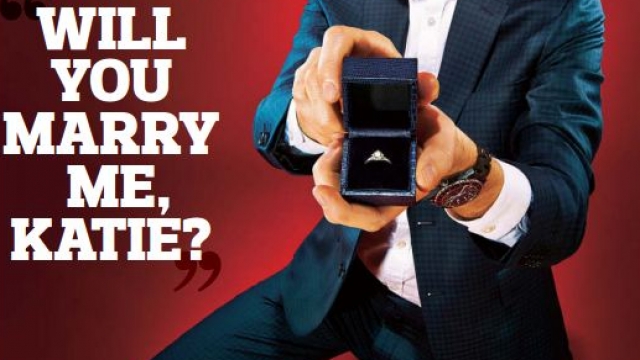 By Briana Koeneman
February 15, 2016
One incredibly brave man in the U.K. decided to ask his girlfriend to marry him by getting down on one knee ... on the cover of a magazine.
SHOW TRANSCRIPT

With all the romance in the air on Valentine's Day, it's not surprising that many people get engaged on the lovey-dovey holiday.

James Greig was one of those people this year. But his Valentine's Day proposal was definitely more public than most.

Greig decided to ask his girlfriend, Katie Moore, to marry him with this incredibly sweet gesture on the cover of The Observer magazine.

The happy couple told The Guardian they were spending the weekend at a hotel when an employee delivered a copy of the magazine's very special edition along with breakfast and champagne.

At first, Moore thought Greig had only printed one copy of the romantic cover just for her, and she was shocked to learn it was actually in circulation. She told the outlet, "Luckily, I am quite laid-back."

And, in case you were wondering, The Observer later confirmed via Twitter that Moore said yes.

The proposal cover was a first for The Observer, but popping the question in print isn't exactly new.

Back in 2013, one man bought a full-page ad in a British newspaper to ask his girlfriend to marry him. Of course, she said yes.

As for Greig and Moore, they have yet to set a wedding date. But the bride-to-be says basking in the glow of their now-famous engagement has been "wonderful."