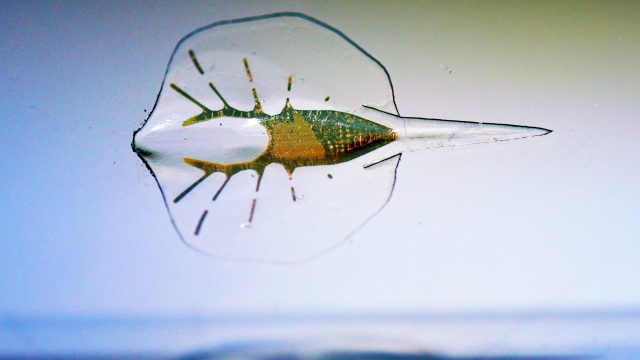 Scientists have built what you should really only describe as a cyborg stingray. It's a soft-bodied synthetic fish that uses real living cells to move around.

The goal is to mimic the gentle and efficient way stingrays and skates glide through the water. But while earlier robots have done that with motors, wires and electricity, this one does it with heart cells grown from rats.

No wires, no electronics, just a springy skeleton, a silicone body and a thin coating made from beating heart tissue.

You might think controlling a machine with no electronics would be impossible, but over the past decade or so, scientists have learned how to engineer cells to respond to flashes of light.

So by shining pulses of light at the stingray, the researchers were able to make it swim. Not only that, they could control its speed by varying the light's brightness and control its direction by shining more light on one side or the other.

The study, published in the journal Science, says this research paves the way for autonomous artificial creatures — so, drone fish — that are able to respond to their environments.

For right now, though, that environment is limited to a solution that comes packed with the salt and glucose the heart cells need to function.

This video includes clips from Sung-Jin Park, Paul Burridge and the Massachusetts Institute of Technology and images from Karghen Hudson and Michael Rosnach. Music provided courtesy of APM Music.