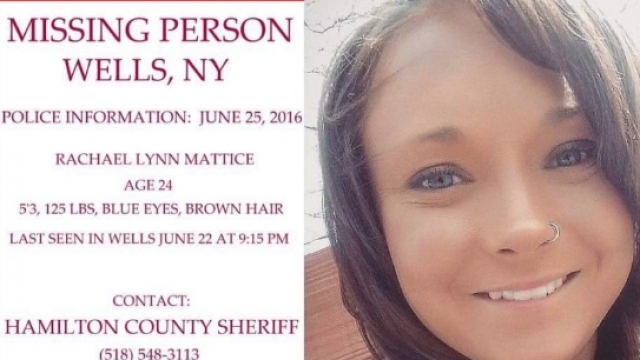 SMS
A New York Woman Has Returned Home After Going Missing Weeks Ago
By Grant Suneson
By Grant Suneson
July 7, 2016
Rachael Mattice is home safe after going missing for two weeks. She told authorities a man held her against her will.
SHOW TRANSCRIPT

A New York woman is back with her family after she went missing for more than two weeks. Police say Rachael Mattice turned up at her mother's doorstep in upstate New York in the early morning of July 6. She had last been seen June 22.

Twenty-four-year-old Mattice reportedly told police that a man held her captive for two weeks, but beyond that, details are scarce. She says her captor dropped her off blocks away from her parents' home.

Throughout the course of the investigation, authorities said they followed up on more than 300 leads, even using dogs and helicopters to search the area near where Mattice went missing.

Mattice was living in a family camper at a campsite and worked as a home health care aide nearby. A family member went to the campsite and found the camper and her car open and her purse and phone still inside the camper.

Mattice was evaluated at a hospital and released before speaking with authorities. She's reportedly in good condition.

Police didn't release a description of the alleged assailant or his vehicle. They also added that there is no threat to the public but that the investigation is ongoing. They said more information would likely be available by the end of the week.

This video includes clips from WNYT, WXXA and WTEN and an image from Missing Persons of America. Music provided courtesy of APM Music.