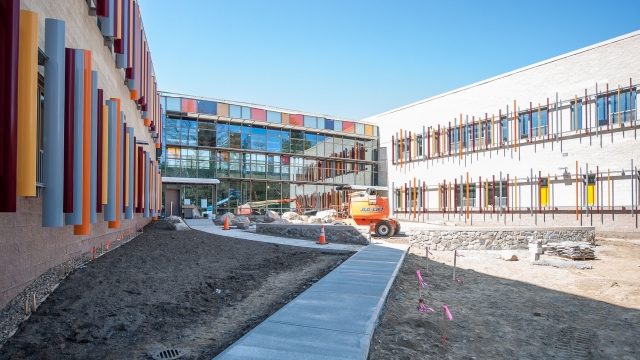 Dozens of kindergartners who survived the Sandy Hook Elementary School massacre will return to their new school as fourth-graders.

After more than three years, the brand new Sandy Hook school is complete. The public got its first glimpse inside the nature-themed building on Friday.

It's built on the same grounds as the previous school but isn't in the same spot. The new building was constructed to look very different from the old one.

Security was a main priority in the design. Visitors have to pass through gates to get to the school. It has bullet-resistant windows, electronic doors that can be locked from the inside and a number of security cameras.

But the security doesn't appear to detract from the welcoming appearance of the school.

"The intent of this building is to offer a warm and comfortable environment for students," said Joseph Erardi, Newtown School District superintendent.

Students have been attending school in a nearby town since the December 2012 massacre.

A gunman forced his way into the school and killed 20 children and six staff members. The school was demolished after the tragedy.

There's no memorial on the property. The town decided it would be inappropriate for that location, so they plan to build a memorial somewhere else.

This video includes clips from WTNH, WABC and ABC and images from Getty Images.