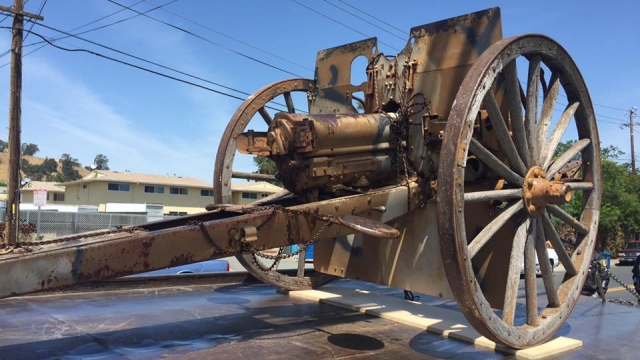 A World War I-era cannon has been recovered after it was swiped from Veterans Memorial Hall in Richmond, California.

The brass and iron cannon, which was stolen May 1, weighs about a ton. It sat outside the building for almost 70 years.

After a KNTV news report about the missing cannon aired, an unidentified man from a neighboring city called the Richmond Police Department saying the stolen piece of history was sitting in his front yard.

The police department wrote on its Facebook page the man had paid $1,200 for the cannon, not realizing it'd been stolen, and "felt absolutely horrible" about it.

Officials are still investigating the theft in hopes of finding the cannon capers.

This video includes images from the Richmond Police Department.