A Group Of Gamers Just Published A Molecular Biology Breakthrough 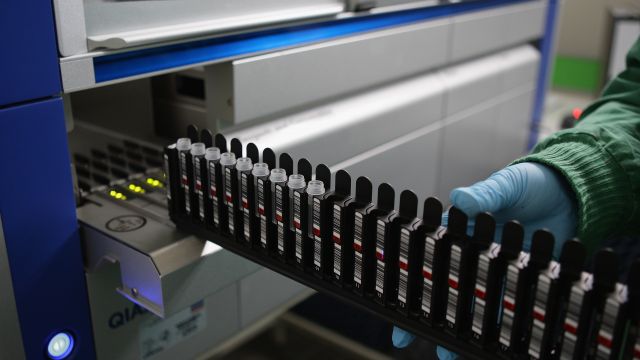 There are now at least two ways to participate in molecular biological research: earn an advanced degree or pick up a video game controller.

The Journal of Molecular Biology just published a peer-reviewed paper, which describes new rules for how to fold RNA molecules into specific shapes. The research could help scientists tell whether a specific RNA molecule is easy to form or practically impossible.

But the paper's authors aren't professional scientists; they're avid enthusiasts of the video game EteRNA, a puzzle game specifically about RNA folding. Their research paper is basically a consolidation of the notes gamers made while playing.

You can think of EteRNA as a sort of distributed computing, where scientists rely on a little computer power from thousands of people to solve complex math problems or look for aliens. Except in EteRNA's case, the scientists are harnessing the human brain's pattern-recognizing and puzzle-solving talents to perform tasks which computers have trouble with.

Since plenty of video games can involve obsessing over and solving intricate puzzles, in many respects, gamers make the perfect scientific workforce. The trick is to make a scientifically accurate game that can still keep people interested.

Any effort to introduce science to gaming involves a level of abstraction meant to keep the player engaged. It's much easier to make people do math homework when it doesn't look like homework, after all.

But as long as the game's internal rules match up with real-life situations, there's plenty of real-world problems that could use a little directed focus from some dedicated gamers.