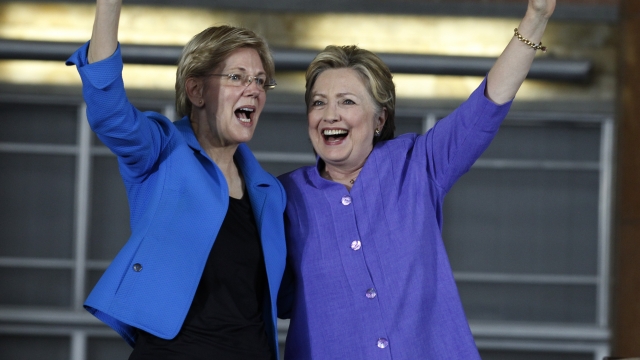 Now that we have an entire GOP presidential ticket along with an unfortunate-looking campaign logo, all eyes are on who Hillary Clinton will be choosing as a running mate — especially after another meeting with Elizabeth Warren at Clinton's home on Friday.

A source told CNN Clinton has been holding meetings with her vetting team to finish the process up as soon as possible. And Warren, who stayed for about an hour, was apparently part of that meeting process.

SEE MORE: The Drawbacks Of A Clinton-Warren Ticket

The furor over Clinton possibly picking Warren has been going on for months. Warren has been the most effective Donald Trump attack dog this entire election season and as veep would bring some serious progressive bona fides to a Clinton ticket.

But it seems like the choice that's becoming less likely because Warren could be a risky pick for Clinton. Her empty Senate seat would be filled by a Republican governor, making it harder to flip the Senate to blue. And though the two seem to get along, there's concern the very charismatic Warren could overshadow the presumptive nominee.

Clinton and Warren have been seen on the campaign trail at least once this year, and it's likely to happen a few more times before all is said and done.

No matter what, it's likely Clinton will be choosing a VP sooner rather than later. We're barely a week away from the Democratic National Convention.