A Burger King In Finland Just Added A 15-Person Sauna 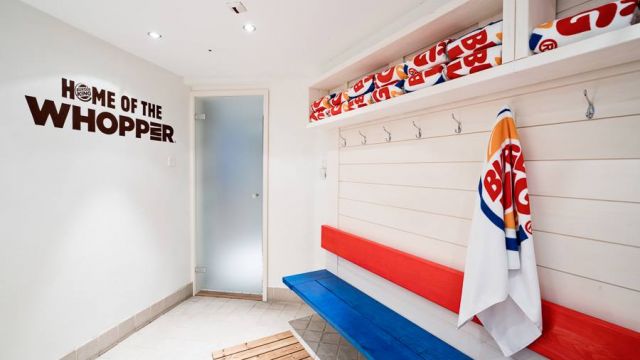 SMS
A Burger King In Finland Just Added A 15-Person Sauna
By Newsy Staff
By Newsy Staff
May 17, 2016
Saunas are a normal part of life in Finland; it's estimated there's one sauna for every three people in the country.
SHOW TRANSCRIPT

Have you ever wanted some fast food while you're relaxing at the sauna?

The restaurant has a laundry room, dressing room, a 48-inch TV and a Playstation 4. The location is also looking to add tablets so you can place your order from there, too.

The 15-person sauna recently earned the Finnish eatery an award.

Euromonitor International says, "The concept takes the idea of a unique dining experience to an extreme, offering both entertainment and functionality for Finnish consumers who see saunas as an integral part of their local culture."

Saunas are kind of a big deal in Finland where there's one for every three people.

And maybe someday you could also get your nails painted with KFC's new edible nail polish. Yep, that's a thing just in Hong Kong — for now.

Still, if chowing down on a Whopper at the sauna sounds like your kind of day, all you'll need is about $280 to book it for a whopping three hours.

This video includes clips from Burger King and KFC and images from Restel and Getty Images.