A Brief History Of The 21-Gun Salute 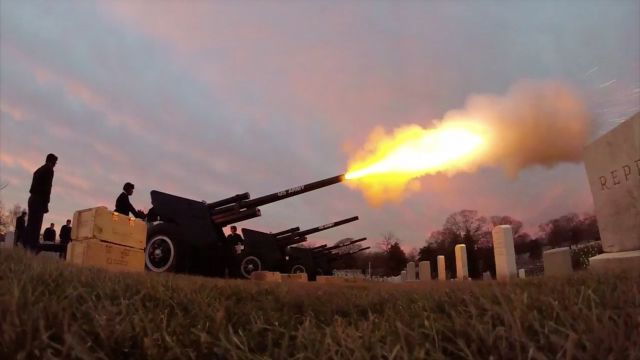 SMS
A Brief History Of The 21-Gun Salute
By Matt Picht
By Matt Picht
May 28, 2016
The U.S. commemorates those who've died in military service with a 21-gun salute on Memorial Day.
SHOW TRANSCRIPT

On Memorial Day, the U.S. honors those who've died in service with a 21-gun salute. But where did the practice come from?

Saluting started out as a way to ritually disarm a weapon, signifying peaceful intentions. Ships coming into harbor would often first discharge their cannons to signify they were unloaded.

Initially, U.S. gun batteries would salute by firing one shot for each state in the Union.

The practice of firing 21 shots in salute was formally adopted by the U.S. in 1875 to match the international salute. Now it's used in ceremonies honoring the national flag, visiting dignitaries and the president.

A 21-gun salute differs from the three-volley salute typically seen at military funerals. That practice stems from a 17th-century European cease-fire tradition. After both sides of a battle had paused to tend to their dead and wounded, three rounds would be fired to start the fighting again.

This video includes clips and images from the U.S. Department of Defense.