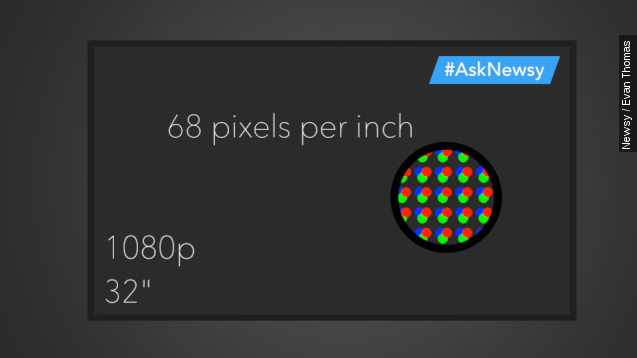 SMS
A Bigger TV Always Means A Better Picture, Right? Wrong.
By Leah Becerra
By Leah Becerra
January 16, 2016
The clarity of your picture depends more on how many pixels per inch your screen has to work with.
SHOW TRANSCRIPT

Here's a question: Will a bigger TV have a better picture?

Not necessarily. The most important measurement for TV shoppers to note is pixel density, usually labeled as pixels per inch or dots per inch.

Now, you might also have a 1080p phone. Let's pretend, you've got an iPhone 6s Plus. Its screen is only 5.5 inches (measured diagonally) and its PPI is about 400. Those pixels seem much sharper because they're so much smaller, crammed into that tiny display.

Let's apply the same resolution to a much larger, 65-inch TV. At this size, the pixel density will only be about 33 pixels per inch. That's kind of a bummer because these big TVs are exactly where people tend to prefer a better picture.

And that might be why the industry seems to be headed toward making 4K TVs the next standard resolution.

So, let's recap: Picture quality depends on a TV's size and resolution. The larger the screen is, the higher resolution you're probably going to want.

This video includes images from Anthony Keal / CC BY 3.0.