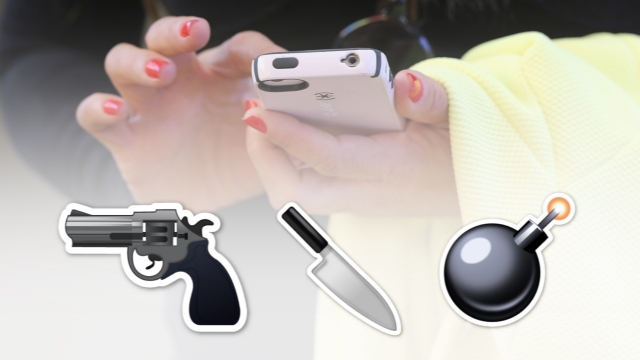 SMS
A 12-Year-Old Girl Faces Criminal Charges For Using Threatening Emoji
By Christian Bryant
By Christian Bryant
February 29, 2016
A girl has been charged with threatening her middle school via emoji. Legal professionals will have to decide whether those emoji are a real threat.
SHOW TRANSCRIPT

If you use emoji, you probably spend a moment or two thinking about the right combination of faces, objects and symbols to get your message across before you press "send." At best, the recipient can easily decode those emoji.

At worst, you're charged for what authorities deem a threat.

The Washington Post reports a 12-year-old Virginia girl has been charged with threatening her school after posting a message on Instagram that included the words "killing" and "meet me in the library Tuesday," along with gun, knife and bomb emoji.

According to the Post, the search warrant says the girl admitted to posting the message under the name of another student at her middle school.

One of the questions prosecutors and a judge will have to answer is when do emoji constitute a legitimate threat? The Virginia student's case is fresh legal territory, but similar cases have popped up before.

Terror charges were dropped against a New York teenager in 2015 after he posted a police officer emoji with three gun emoji next to the officer's head. The teen's attorney told the New York Daily News, "He expressed a dislike of the police based on a particular experience, but never threatened to act on that."

In other cases, people within the legal system have questioned whether emoji should even be admitted as evidence — and how courts should proceed if they are.

The Post reports the 12-year-old Virginia girl was supposed to make an appearance in court at the end of February, but it's uncertain if her case has been resolved.

This video includes clips from Facebook and images from banspy / CC BY 2.0 and Getty Images.