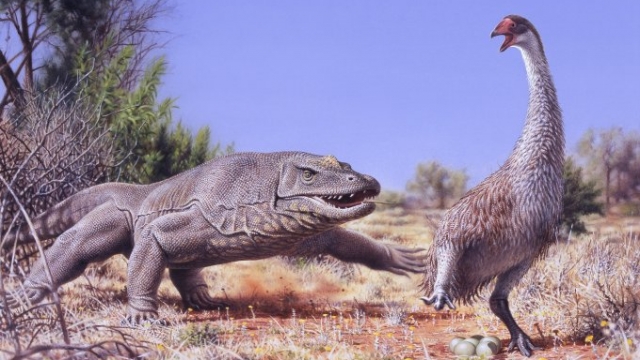 SMS
50,000 Years Ago, Humans Ate A 500-Pound Bird Into Extinction
By Carter Woodiel
By Carter Woodiel
January 31, 2016
50,000 years ago, humans wiped out a flightless bird species in Australia — all because its eggs were too tasty to resist.
SHOW TRANSCRIPT

Roughly 50,000 years ago, an Australian bird species went extinct, not because of competition for space or resources but because its eggs were simply too delicious.

According to a study published Friday in the journal Nature Communications, humans helped wipe out the 500-pound species of flightless bird called Genyornis newtoni.

Researchers at the University of Colorado at Boulder figured this out by looking at eggshell fragments in 10 regions of Australia, which they discovered had been partially charred.

The charred shell fragments were usually found in "a tight cluster" near other fragments that weren't burnt at all, meaning it's unlikely something like a wildfire burned the eggs.

Rather, the researchers said "these characteristics are most consistent with humans harvesting one or more eggs from a nest, making a fire and presumably cooking the egg."

Fast forward a few thousand years, and the bird was extinct, though humans weren’t the only factor at play. The Australian climate was drying out at the time, putting more stress on bird populations.

Still, the study says that sort of shift in climate had happened before and says human activity was "more likely to have been the decisive factor" in the extinction of Genyornis newtoni.

The bird is yet another animal we now know met its demise due in part to human actions, which isn't exactly uncommon. Scientists say human activity is wiping out enough species that we’re on the verge of a mass extinction for just the sixth time in our planet’s history.