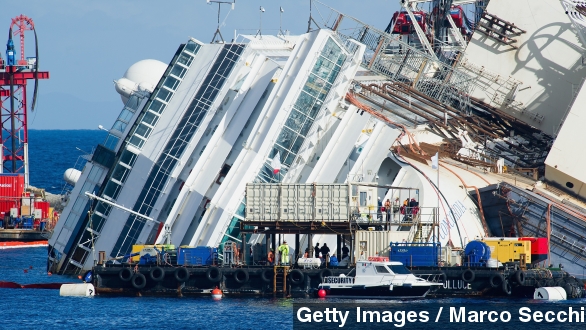 Almost three years after the cruise ship Costa Concordia partially capsized off the coast of Italy, killing 32 people, the remains of the disaster's last missing victim have finally been recovered.

Salvage workers dismantling the vessel announced Monday they have located remains believed to belong to Russel Rebello, a former waiter on board the Concordia, who has been missing since the ship sank.

The body was apparently hidden behind overturned furniture in one of the cabins crushed during the wreck, according to Italian newspaper La Repubblica. The outlet added scraps of Rebello's uniform were uncovered with the remains.

Rebello's brother Kevin has been the public face of the search for his brother's body. He confirmed the news in a Facebook post.

"I don't have words to express. Just my pain, my tears, my heart pounding harder and my body trembling when I broke the news to my parents." Rebello also noted said brother's body would be returned home to India after a DNA test for burial.

Kevin Rebello has made numerous trips to the shipwreck since the disaster and has maintained a consistent presence in Italian and Indian media. He also collected eyewitness accounts suggesting his brother died helping people reach lifeboats, even giving his lifejacket to someone else.

Rebello was one of two known victims of the wreck whose body was not recovered shortly after the disaster. The other victim's remains were discovered in October after the ship was raised from the sea floor. (Video via CBS)

The BBC adds a word of caution to the news, noting local officials have announced the potential discovery of Rebello's body twice before. Both announcements were declared false alarms after DNA analysis. But with every other passenger on the ship accounted for, the remains must belong either to Rebello or to a stowaway.

The Costa Concordia wreck is currently being salvaged in Genoa. Its captain is still on trial for allegedly abandoning the ship during the disaster.