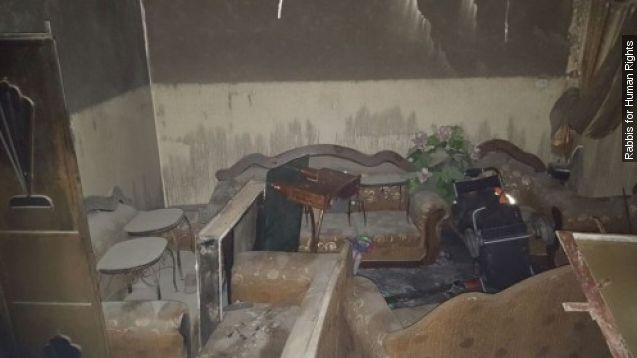 SMS
2 Israelis Charged In Arson, Deaths Of Palestinian Family
By Melissa Prax
By Melissa Prax
January 3, 2016
After three members of a Palestinian family died in a fire in July, two men have been charged with murder and accessory to murder.
SHOW TRANSCRIPT

Two Israelis have been charged with murder after an arson in late July killed three members of a Palestinian family.

A man was charged with the attack on a family's home July 31 in West Bank. A minor was also charged with accessory to murder. An 18-month-old boy and his parents were killed. The family's older boy survived and is still recovering from severe burns. (Video via Press TV, CCTV)

In addition to allegedly lighting the house on fire with a Molotov cocktail, the suspected attackers, a 21-year-old and 17-year-old, are accused of spray painting "Long live the King Messiah" and "revenge" on the building.

Israeli Prime Minister Benjamin Netanyahu was quick to condemn the incident, calling it an act of terrorism.

But, despite the suspects' arrest, many Palestinians say they don't trust the Israeli judicial system. (Video via BBC)

According to the United Nations, "Israel is obliged under international law to protect Palestinians and their property from acts of violence by settlers, to ensure accountability for crimes committed, and to provide a remedy for any violations suffered." (Video via Al Jazeera)

Last month, protests erupted in Jerusalem over the alleged methods the Israel Security Agency used to question suspects in the case.