2 Horses Die At Pimlico Before The Preakness Stakes 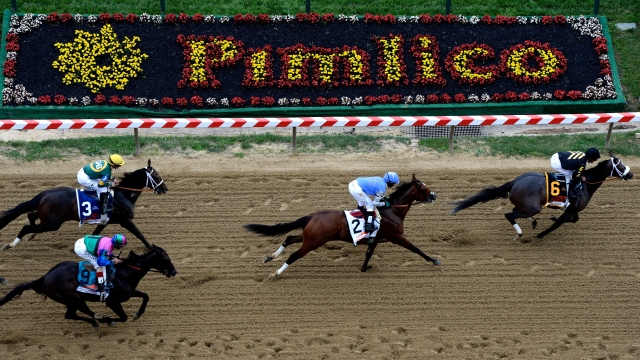 Exaggerator's win at Saturday's Preakness Stakes was overshadowed by the death of two horses at Pimlico Race Course. The horses died in separate incidents before the Triple Crown race even began.

Nine-year-old gelding Homeboykris fell over and died while heading back to the barn after winning the day's first race. Track officials believe the cause of death was a "cardiovascular collapse."

Three races later, 4-year-old filly Pramedya was euthanized on the track after falling and breaking a bone in her front left leg.

Jockey Daniel Centeno was thrown from the horse and broke his collarbone.

Pimlico Race Course has been a disaster for Pradmedya's owners, Gretchen and Roy Jackson. Their horse Barbaro also broke his leg there during the 2006 Preakness Stakes and was eventually put down.

Racehorses dying on race days isn't as uncommon as you might think. The New York Times reported in 2012 that, on average, 24 horses a week die at U.S. racetracks.

In response to the horses' deaths at Preakness, PETA called for the owners to release each horse's veterinary records, saying "most breakdowns and deaths occur because horses have pre-existing injuries that are masked by the excessive use of legal medications."

A Pimlico spokesman said both horses will be taken to Pennsylvania for necropsies to officially determine the cause of death.

This video includes images from Getty Images and Twitter /  @PimlicoRC and a clip from the Baltimore Sun.