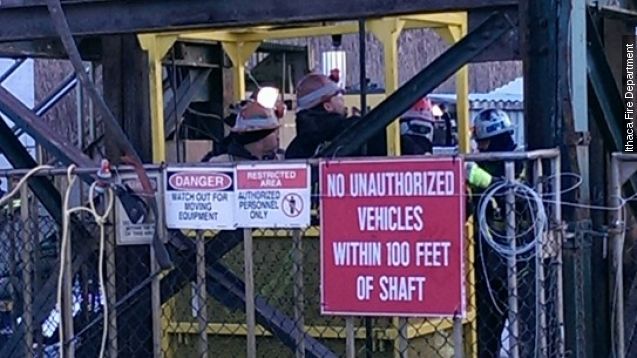 SMS
All 17 Trapped Salt Miners Rescued In Upstate New York
By Matt Moreno
By Matt Moreno
January 7, 2016
The workers at Cargill's Cayuga Salt Mine got stuck in an elevator 775 feet below the surface at about 10 p.m. Wednesday.
SHOW TRANSCRIPT

All 17 salt mine workers are safe after they were trapped underground for several hours in New York.

"Extremely relieved and happy to say they're out," said Cargill Mine Manager Shawn Wilczynski.

Around 8:30 a.m. local time, the last of the 17 miners was pulled from the stuck elevator at Cargill's Cayuga Salt Mine. They'd been trapped since about 10 p.m. Wednesday.

The workers were stuck in an elevator about 800 to 900 feet down.

Officials used a crane to lift the workers out of the mine in groups of four. Tompkins County officials say the first miners came to the surface around 7 a.m., and each trip took about 45 minutes.

The Ithaca Fire Department called it "one of the most difficult rescues in recent memory."