Second Night Of Charlotte Protests Spur A State Of Emergency 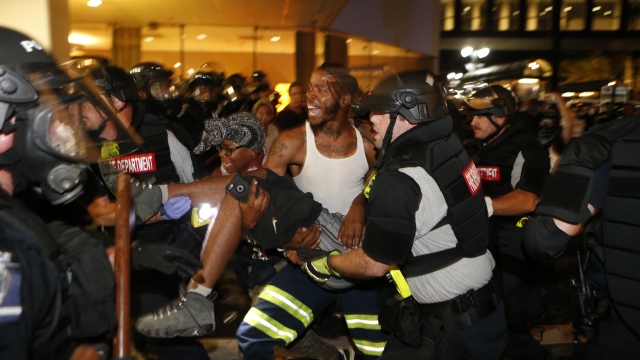 North Carolina's governor has issued a state of emergency following a second night of violent protests in Charlotte.

Gov. Pat McCrory said he was working to deploy the National Guard and Highway Patrol to help local law enforcement.

The announcement came after city officials said one person was shot and killed during the protests. They later corrected themselves, saying the person — who was shot by another civilian and not law enforcement — was on life support.

Four police officers were hurt but have injuries that are not life-threatening.

Hundreds of protesters filled the streets of downtown Charlotte on Wednesday night, and police responded with riot gear and tear gas.

"Absolutely we're trying to disperse the crowd. We've been very patient, but now they've become very aggressive throwing bottles and so forth at my officers. So it's time for us now to restore order," Charlotte-Mecklenburg Police Chief Kerr Putney told Fox News.

Demonstrators were protesting the shooting death of Keith Lamont Scott. Police were trying to serve an arrest warrant Tuesday when they say they spotted Scott getting out of a car armed with a gun. The officers said they felt "a lethal threat" before shooting Scott.

Protests spurred by police shootings have been happening around the country for months, though many have been peaceful. Violent protests happened most recently in Milwaukee, where protesters set fire to and looted local businesses after a deadly officer-involved shooting.