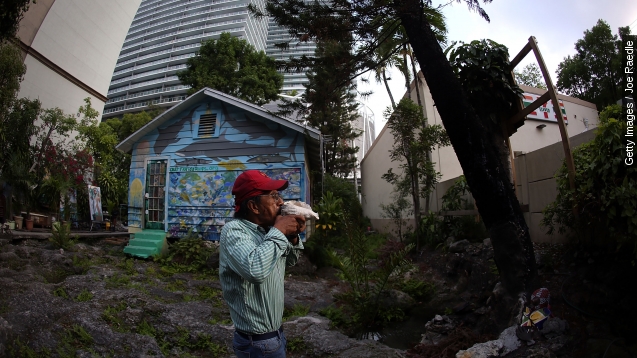 SMS
$1.8M Won't Buy This Man's Miami Property On 'Sacred Ground'
By Kate Grumke
By Kate Grumke
May 16, 2015
A Miami resident has been excavating his backyard for 50 years, and even though his land is worth $1.8M he won't sell it because he says it is sacred.
SHOW TRANSCRIPT

This little home is valued at more than $1.8 million and is in a Miami neighborhood where prices are only increasing, but its owner says no matter how much he's offered, he won't sell.

That's because Ishmael Bermudez's home sits on what he says is sacred land. Over the past 50 years he has excavated the backyard, and says he has discovered parts of Miami's Native American history. The area was home to the Tequesta people when Europeans first came to Florida. (Video via YouTube / miamihistory1896)

In the yard, Bermudez claims to have found Native American artifacts, bones, ancient shells and a spring. Bermudez thinks that spring was the site of an ancient altar, but a Miami archaeologist told the Miami New Times that "is kind of a stretch."

Still, it's not a far-fetched claim. Multiple discoveries have indicated parts of Miami sit on historically significant sites.

Last year, an archaeologist unearthed an ancient Tequesta site in Miami that could be up to 2,000 years old — possibly the oldest prehistoric town in the Eastern U.S.

"It does explain very clearly to everyone as we look at this this is where Miami came from and Miami's earliest days are right there," architect and preservationist Richard Heisenbottle told NPR.

And just six blocks north of Bermudez's home is where archaeologists found the Tequesta ceremonial cite known as the Miami Circle in 1999.

The Miami New Times reports after that discovery, Bermudez's home became a gathering place for Native American activists working to preserve the Miami Circle. Bermudez is from Colombia, but his father was descended from Navajos and Pueblos, and inspired his son to embrace his Native heritage.

He has told multiple outlets developers have approached him to try to buy the house, but he has no intention of caving.

He told the Miami Herald, "There’s not enough money that can buy what's on this land because it’s simply priceless ... How can you put a price on the history of humanity?"