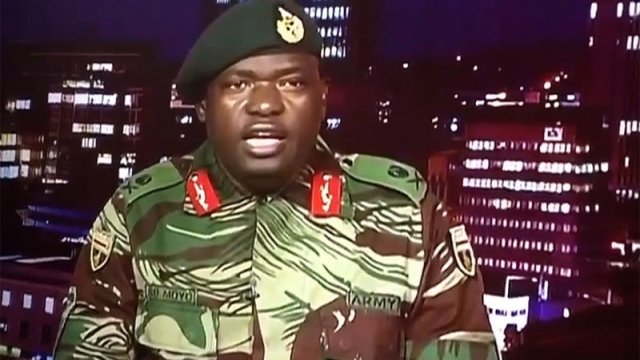 SMS
Zimbabwe's President Mugabe Confined To Home After Army Enters Capital
By Jake Jones
By Jake Jones
November 15, 2017
Military personnel took over the country's state-run TV station to broadcast a message that it was targeting "criminals" around the president.
SHOW TRANSCRIPT

Zimbabwe's state-owned TV station just put out a broadcast that could be a pretty clear signal President Robert Mugabe's nearly 40 years in power are coming to a close.

We reported Tuesday on news coming out of Zimbabwe's capital, Harare.

Sources on the ground reported hearing explosions and gunshots as military vehicles took up key positions in the city. Soldiers took over the Zimbabwe Broadcasting Corporation and aired a message to the country's citizens.

On Wednesday, an army official took to the airwaves to say that the military had stepped in to stop a purge within the ruling ZANU-PF party that targeted army veterans and those with military support. He said President Mugabe was "safe" and soldiers were "only targeting criminals around him."

Things got rocky in Zimbabwe after Mugabe fired Vice President Emmerson Mnangagwa, a potential successor who had the support of the country's military and veterans. Many people believe Mugabe fired him to help out his wife's ambition to become the next president.

South Africa's president said he spoke with Mugabe and relayed that Mugabe was confined to his home but in good condition. Some sources believe Mugabe's wife is in Namibia.

The ruling party seems to have already thrown its support behind Mnangagwa.