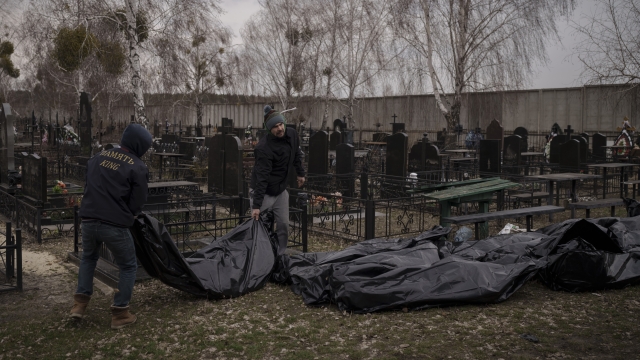 Speaking via video link from war-torn Ukraine, Ukrainian President Volodymyr Zelenskyy told the U.N. Security Council that the gruesome images the world is seeing from the liberated Kyiv suburb of Bucha, some of bodies bagged or bound, is just the beginning — that Russia is committing war crimes not witnessed since World War II.

Not only is Russia turning cities to ash and causing mass starvation, he says it’s crushing civilians with tanks, raping women, killing "entire families" and burning bodies. He asked the Security Council to dissolve itself, unless it removes Russia.

"If there is no alternative and no option, then the next option would be dissolve yourself altogether," Zelenskyy said, quoted here through an interpreter.

The U.S. ambassador to the U.N. pushed for Russia’s suspension from the U.N.’s Human Rights Council.

"Not only is it the height of hypocrisy — it is dangerous," said Linda Thomas-Greenfield, U.S. ambassador to the U.N. "Russia is using its membership on the Human Rights Council as a platform for propaganda to suggest Russia has a legitimate concern for human rights."

"Any and all accusations should be based on facts," said Zhang Jun, Chinese ambassador to the U.N. "Before conclusions are drawn, parties should access restraint and avoid unfounded accusations."

Russian officials claim without proof, the images of corpses are fake and that the grim scenes were staged by Ukrainian civilians — its ambassador repeating a Kremlin lie that Nazis control Ukraine.

"We are told that there can be no Nazis in Ukraine," said Vasily Alekseevich Nebenzya, Russian ambassador to the U.N. "However, we know very well that not only are they there, but unfortunately they are running the show."

But the Biden administration says the evidence is overwhelming.

"What we’ve seen in Bucha is not the random act of a rogue unit," said U.S. Secretary of State Antony Blinken. "It’s a deliberate campaign to kill, to torture, to rape, to commit atrocities. The reports are more than credible. The evidence is there for the world to see."

New sanctions are expected to be announced this week.

"We're consulting with our allies on that question now ... and I think you'll see new measures rolled out this week," said Matthew Miller, special adviser for communications with the White House National Security Council.

With the retreating and regrouping of Russian forces, Ukrainian authorities expect to see more devastating scenes of civilian deaths in liberated towns and cities near Kyiv, especially in Borodyanka, northwest of the capital.

Meanwhile, Moscow’s bombardment continues. Hundreds of Ukrainians, mostly women and children, are fleeing the southern port city of Odessa out of fear for what could come next.