Study: Your Favorite Show Might Say A Lot About Your Politics 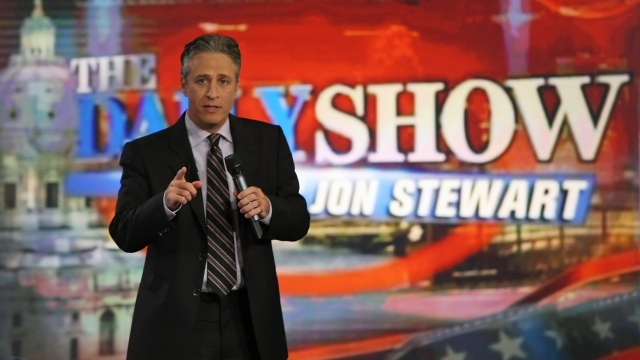 SMS
Study: Your Favorite Show Might Say A Lot About Your Politics
By Casey Mendoza
By Casey Mendoza
April 30, 2019
A new report from the University of Southern California links television viewing habits and politics.
SHOW TRANSCRIPT

What we watch on television says a lot about our political views — and researchers have been looking at this intersection of TV and politics for over a decade.

"'Saturday Night Live' was a little different. It actually had some red fans when we asked them, 'Which of these late night offerings do you like to watch?' It was one of the ones that they were more likely to select. But this time around, I think 'The Daily Show' was not the juggernaut that it used to be. Trevor Noah, I think, is a respected host, but he isn't the cultural icon that Jon Stewart was. And I think that 'SNL' has preceded 'The Daily Show' in the bosoms of the liberals."

Johanna Blakley is one of the researchers behind the Media Impact Project, which recently published this report linking television watching habits with political ideologies and behavior.

The report has a lot of other interesting findings — like the fact that liberals and independents watch significantly more television than conservatives; that Americans may actually be more moderate than they were in 2008; and that most people, no matter their political leanings, love to hate-watch "Pawn Stars."

So, what do we do with all of this information?

"To the industry, they should be very concerned about their audience, and they should be responsive to its needs. And so this data set really reveals a lot of information about the attitudes and concerns and even some psychographic aspects of audience members."

For people in the entertainment industry, this data offers insights on how to be impactful — how to actually reach audiences who want to be more politically active.

For shows that independents watch, like "Empire" or "Grey's Anatomy", that information matters.

"This kind of data is incredibly powerful when you're trying to generate storytelling that achieves some sort of social impact. It really gives you some information about your audience that's going to make it more likely that your story is going to work."

On the flipside, information like this is also valuable for political campaigns.

"The first finding that we came across was that no matter what your position was on immigration, if you said that it was a top issue for you, it was very likely that you were a fan, a big fan, of 'The Walking Dead' — that you would list that as your favorite show. And so this was a statistically significant finding. We thought, 'Oh, wow, this is great. You know, we'll put this out on Twitter, and so show people what we can do with this data.' And we found an article in Forbes saying that that's precisely what the Trump campaign had discovered, and that they started buying ads against 'The Walking Dead,' because they had the instinct that there were people who were very skeptical about immigration watching that show."