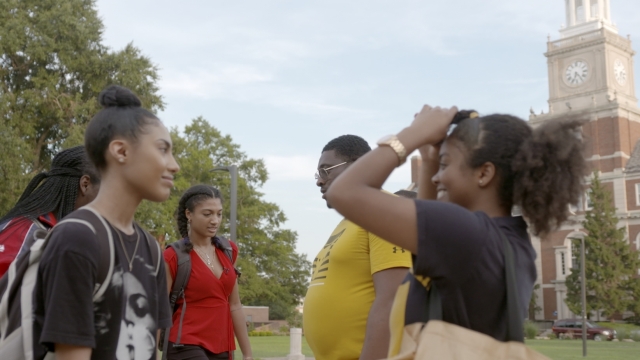 Black voters are key to unlocking the Democratic nomination, but when it comes to their preferred candidate, there's a clear generational divide.

Most black voters are [leaning] towards Joe Biden, why are you against [him]?

"I'm against Joe Biden not because I don't like him as a person," said Naheim Banks. "I don't feel like his policies are going to give us the revolution that we need in this country. We don't need just to beat trump or to go back to normalcy we need a whole political revolution."

For many of the members of the Howard University College Democrats this will be the first primary and presidential election they have a chance to participate in. The club as a whole will not endorse a candidate ahead of an official nomination but members say they aren't looking for the same qualities in a candidate as older voters.

Young black voters like the ones we spoke to here are looking at candidates like Bernie Sanders, Elizabeth Warren and Kamala Harris.

Sanders leads the field among black voters between the ages of 18 to 29. Joe Biden on the other hand is the first pick for black voters above the age of 65.

"I prefer someone more progressive because we have our country and the world facing issues like climate change that requires bold action like the Green New Deal and bold progressive policies," said Maurice Green.

Most of the students we talked to here are looking for someone with a bold and progressive agenda.

Candidates are taking note and working to maintain or grow their base. Biden and Pete Buttigieg have recently hired diverse campaign staff to take on targeted outreach efforts towards minorities. Elizabeth Warren has pitched plans to close the wealth gap and help families of color prosper.

The Bernie Sanders campaign pointed out how their policies are resonating with young black voters, while Kamala Harris' campaign mentioned the California senator's focus on HBCUs and her Howard University roots.