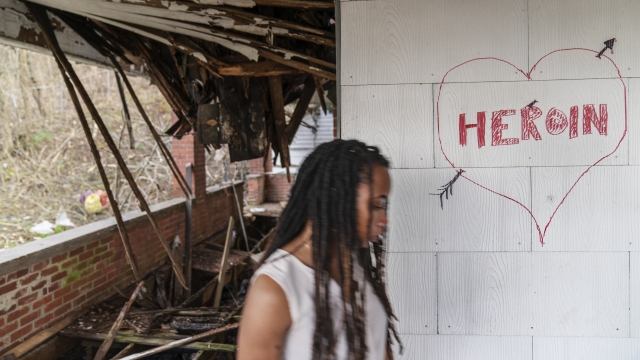 This is Huntington, West Virginia. And this is a common story here, especially now -- again.

"And I tried heroin," said resident Joshua Messer. "And I got addicted to it, and an ambulance came here, I woke up and the paramedics were all around me, and I was blue. And I was — they said I was dead, or I OD'd."

As late as 2017, Huntington was considered ground zero for the heroin and opioid epidemic.

But in two years, with determined community response and treatment efforts, it cut overdose calls in half.

But those efforts are being challenged by another crisis: the COVID-19 pandemic. Amid social isolation, fatal overdoses across West Virginia increased by nearly 40% over the 12 months ending in August 2020.

"Regardless of COVID, people are still out there overdosing. Like, the world is still going," says this first responder.

Larrecsa Cox is a member of Huntington's Quick Response Team, tasked with battling the opioid crisis and trying to save lives. But that's getting harder.

"As far as the pandemic goes, that just really put a ringer in everything, especially with trying to connect with people that did, in fact, overdose and did show up in our data. Just getting to them was kind of difficult. People didn't want to open their doors because of the pandemic. We didn't go in people's houses," she said.

This isn't just a challenge for Huntington or West Virginia. The CDC reports 88,000 people died of drug overdoses nationally in the 12 months ending in August. That's the most ever recorded in a year.

"A lot of people started using drugs more because they're trapped in their house," Messer said. "There's really nothing to do."

Now in treatment, Joshua Messer can reflect and give thanks to the Huntington Quick Response team for saving his life.

Reporting from The Associated Press.