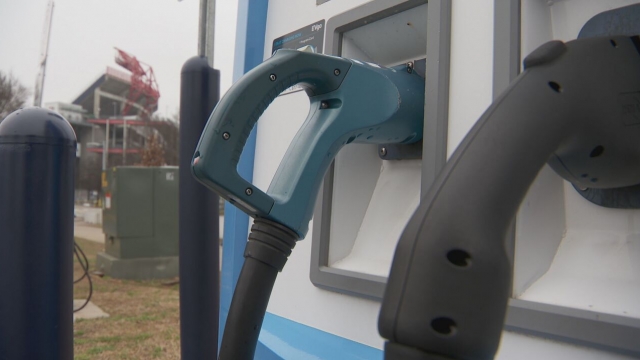 In fact six of the seven car ads during the Super Bowl, the most watched TV program of the year, were for electric vehicles.

"To me it was almost a no-brainer to go electric, and it's been honestly the best thing," said Tesla driver Josh Lyles.

At the forefront of a new industry, electric vehicle owners like Lyles can often feel like salespeople.

"It's always a lot of questions, a lot of curiosity," he laughed.

He doesn't mind. Lyles does work in sales and used to work for Tesla in Brentwood.

He showed NewsChannel 5 Traffic Anchor Rebecca Schleicher around his Model 3.

"You have the charging port right here," he said, pointing to the back, on the side of the vehicle. It connects similar to any plug you use at home and locks into place to prevent tampering.

Running on battery, there's no engine. Which means no oil changes or regular vehicle maintenance, and a lot more storage space.

"This is where I can open the front trunk, we call it the 'frunk' for short," Lyles said, "and so up here you just have trunk space."

He says that space is also a safety feature, acting as a buffer if there's a crash.

Lyles has almost forgotten the stress of gas prices going up or running on nearly empty.

"I hear coworkers complain, but I don’t even pay attention to the gas price signs," he said.

And soon, he'll have even more, albeit quiet, company on the road.

Electric vehicle sales are growing, accounting for nearly 10% of U.S. vehicle sales in January, according to numbers obtained by NewsChannel 5 from the Department of Energy's Argonne National Laboratory.

Car manufacturers are debuting new models and investing in more electric vehicle production than ever before.

"The goal is to allow for growth of EVs to occur across our state," explained TDOT Deputy Commissioner Preston Elliott.

Elliott expects half of cars sold will be hybrid or electric in the next five years.

"This is a DC Fast Charger which will give you about a full charge in 30 minutes," he showed NewsChannel 5 the charging station at Nissan Stadium.

It's one of around 200 public charging stations located in Nashville, according to the Dept. of Energy's interactive map.

For the most part, electric vehicle owners charge at home. You can do so with an outlet that accommodates 240 volts.

"So if you're wanting to go from Nashville to Knoxville or Knoxville to Memphis, you can do so with reliability," Elliott said.

Elliott leads the team developing the plan to put a station with multiple charging ports every 50 miles at the least, concentrating on rural and under-served areas not currently saturated with charging options.

"We'll be looking at park 'n ride lots, let's say in a mall, a shopping center or at a hotel somewhere where they (drivers) have the ability to access easily off the interstate and be able to make it back to their trip," Elliott said.

It can cost some $100,000 to get a single DC fast charger up and running, which includes access to power, right-of-way and a partnership with a vendor.

The department will submit its plan to the Federal Highway Administration for approval in August.

That way going electric is no longer a hard sell.

"Industry, much like our phones, led us that way," Elliott said.

Lyles says even before TDOT's plan is realized, driving to his hometown near Atlanta hasn't been a problem. He makes one stop to charge in Chattanooga.

But he likes that more people, and car makers, appear to be switching gears toward electric. That means more competition, better options, lower prices and more frequent software updates.

"The practicality of owning one just becomes easier and easier over time," he said.

Made in America? How about Made in Tennessee.

The Volunteer State is becoming a hub for electric vehicle manufacturing. More than 15,000 electric vehicles are already produced in the state every year, which makes Tennessee No. 1 in the Southeast.

The Ford Blue Oval megasite in West Tennessee will build electric trucks and manufacture batteries when it's up and running. And GM and Volkswagen are both building electric vehicles in the state after Nissan started it all in Smyrna with the first locally produced electric car in 2013.

And recently, Australian-based Tritium announced it will begin building 30,000 of the DC fast chargers in Lebanon every year.

This story was originally published by Rebecca Schleicher on newschannel5.com.