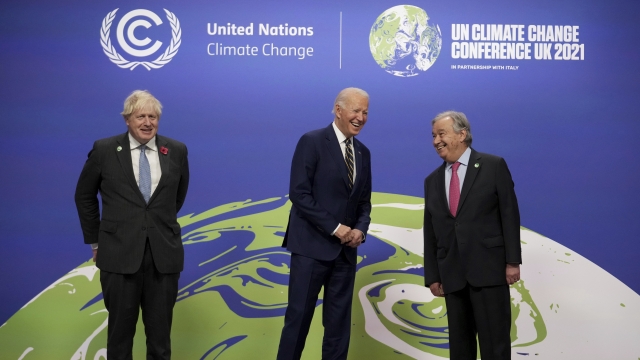 Leader after leader is speaking in ever-more-dire terms about where the world is right now.

U.K. Prime Minister Boris Johnson said, "This is not a movie, and the doomsday device is real."

President Joe Biden, sharing the urgency, said, "Will we act? Will we do what is necessary? Will we seize the enormous opportunity before us? Or will we condemn future generations to suffer? This is the decade that will determine the answer. This decade."

The signs of climate change are already here, from floods to droughts to wildfires and hurricanes.

"We have the ability to invest in ourselves and build an equitable, clean energy future and in the process, create millions of good-paying jobs and opportunities around the world," President Biden said. "Cleaner air for our children, bountiful oceans, healthier forests and ecosystems for our planet."

President Biden, like other leaders, says saving the planet by switching to electric cars and limiting carbon emissions can actually help create jobs. But, he sought to deal a stiff dose of realism.

"So the idea we're not going to need gasoline for automobiles is just not realistic," he said. "But we will get to the point that by 2050, we have zero emissions."

Still, President Biden directed his criticism at former President Donald Trump, who he says "put us behind the eight ball."

"I guess I shouldn't apologize, but I do apologize for the fact the United States in the last administration pulled out of the Paris Accord," the president said.

And he targeted the world's top polluter, China, pressing the country to burn less coal. China is planning to peak its carbon emissions by 2030 before becoming carbon neutral by 2060. Right now, the country does not have a set cap on greenhouse gas emissions. President Xi Jinping did not attend this summit.

"China basically didn't show up in terms of any commitments to deal with climate change," President Biden said. "And there's a reason why people should be disappointed in that. I found it disappointing myself."

The goal of this conference in Scotland is to limit global warming to 1.5 degrees Celsius above pre-industrial levels. The world has already warmed 1.1. If current trends hold, the planet will have warmed by 2.7 degrees by the end of this century.

"Carbon dioxide was about 350 parts per million in the atmosphere in 1992, and this year we're likely to reach about 415 parts per million," said Rob Jackson with Global Carbon Project. "So, these are concentrations the Earth hasn't seen for millions of years."

Now, the world leaders at the summit are already starting to leave. Other government officials will continue negotiations on issues like how much aid smaller nations should get, how larger nations can coordinate to cleaner energy and how the severe impacts of climate change can be mitigated.

"The first thing we need to do is simply use fewer fossil fuels," Jackson said. "On top of that, we need to promote energy efficiency so we can produce more goods using less energy and less emissions. And after that, we can go to more sort of advanced or science fiction like technologies, carbon capture and storage or even pulling greenhouse gases from the atmosphere." 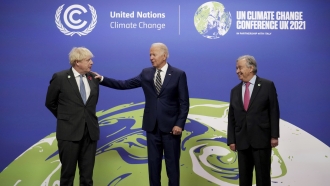