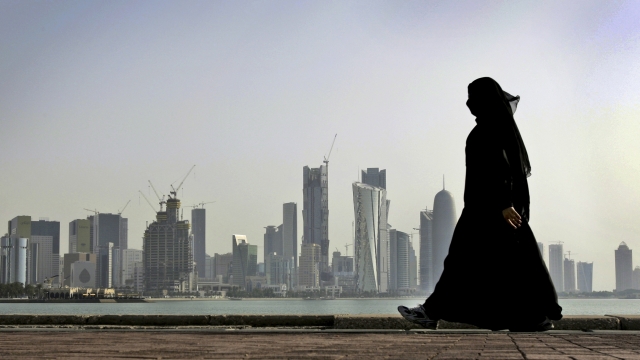 Official-looking flyers have circulated on social media describing cultural expectations for fans attending the World Cup in Qatar. Some include rules for women's attire: Shoulders and knees must be covered.

Problem is, it's bogus.

While the local organizing committee suggests that fans "respect the culture," no one will be detained or barred from games in Qatar because of clothing choices. But persistent rumors swirling around appropriate garb and modesty at soccer's biggest tournament have also drawn attention to the country's record on equality.

"There isn't anyone going to go around arresting you for this because there isn't an official dress code," Begum said. "There isn't a compulsory dress code and you can't get sanctioned for it. It's just a social restriction, a social tradition."

The local organizing committee includes a section on cultural awareness in its fan guide.

"People can generally wear their clothing of choice. Shoulders and knees should be covered when visiting public places like museums and other government buildings," it said.

The phrase "public places" is up to interpretation.

Women are cutting their hair to protest the death of Iranian Mahsa Amini.

"Fans can wear shorts and short sleeve shirts, and women are not required to cover their heads or faces. However, there are many buildings that require both men and women to cover their shoulders and knees before entering, including museums, shopping centers, and some restaurants," the guide says. "We recommend that fans carry some pants and/or a top with sleeves if they plan on entering any buildings, as they may be asked to put them on.

"In the stadiums, men and women will be required to wear tops. People will not be permitted to go shirtless during matches or in public settings."

The first World Cup in the Middle East comes at a time when there is international attention on the treatment of women in Iran. The nation, which sits across the Persian Gulf from Qatar, has been rocked by anti-hijab protests following the death of 22-year-old Mahsa Amini, who died while being held by morality police for allegedly violating the country's compulsory dress code for women. Activists have called for Iran to be expelled from the World Cup.

With Islam encouraging female modesty, most Qatari women wear headscarves and a loose cloak known as the abaya.

The move comes as Qatar faces intense international scrutiny over its labor practices ahead of the tournament.

Begum, who wrote about Qatar and its treatment of women in a 2021 report for Human Rights Watch, said that while women have made progress in Qatar, they still face discrimination in almost every facet of their lives. Women must get permission from male guardians to marry, pursue higher education and work at certain jobs. Guardians can bar women under 25 from traveling abroad.

It's a conservative culture that has little tolerance for dissent among its own citizens, she said.

"There are no independent women's rights organizations and that's partly because the authorities have laws that make it difficult for you to set up associations that are in any way deemed political. You are not allowed," Begum said. "Women find it difficult to express or demand their rights offline or even online."

That's one of the reasons critics are questioning FIFA for awarding of the 2022 World Cup to Qatar. Observers certainly noticed when retired American soccer star Carli Lloyd wore a long, high-collared dress with long sleeves for the World Cup draw earlier this year.

A letter recently circulated among teams from FIFA president Gianni Infantino and secretary general Fatma Samoura asked nations not to bring political or ideological issues into the tournament.

"Please," they wrote, "let's now focus on the football."